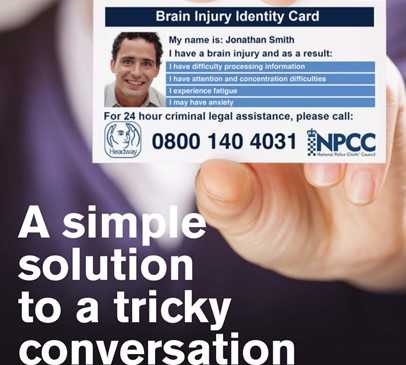 The launch of a new identity card has been praised by a Cambridgeshire brain injury survivor who believes it will help people with brain injuries to get the support they need.

It’s a brilliant thing because it takes away the headache and confusion, not just for yourself but for who you are talking to.

The card is part of the charity’s Justice Project, which aims to raise awareness of brain injury within the criminal justice system, and ensure survivors are identified at the earliest possible opportunity to ensure they receive appropriate support.

The ID card has the additional benefit of breaking down social exclusion; with holders having renewed confidence in the knowledge that they can easily explain their support needs should they require assistance in everyday situations.

Chris Eleftheriou who receives support from local group Headway Cambridgeshire which was one of the Headway branches that piloted the scheme said: “It’s a brilliant thing because it takes away the headache and confusion, not just for yourself but for who you are talking to. I’ve shown it to people twice to explain the effects of my brain injury and I now use it as my main form of ID.”

To access a Headway Brian Injury Identity Card, which is personalised to include the individual’s photo and lists some of the effects they commonly experience, applicants are asked to provide clinical verification of their brain injury.

"At Headway Cambridgeshire we were part of the pilot scheme and explored the benefits of the card with our clients who were instrumental in deciding what worked and what didn’t.

"This initiative not only helps police to quickly identify those with a brain injury but it also enables people to access specialist legal support from solicitors with expertise in the field of brain injury.”

The Headway Brain Injury Identity Card is supported by organisations across the UK, including the National Police Chiefs’ Council, Police Scotland, the Police Service of Northern Ireland, the National Appropriate Adult Network and NHS England’s Liaison and Diversion Service.

Headway Cambridgeshire is a charity and was founded in 1989, supporting people who have had an acquired brain injury including traumatic brain injury, their families and carers.  The charity has a wide range of services delivered across the county with hubs in Cambridge, Peterborough and Huntingdon as well as supporting people in their own homes.