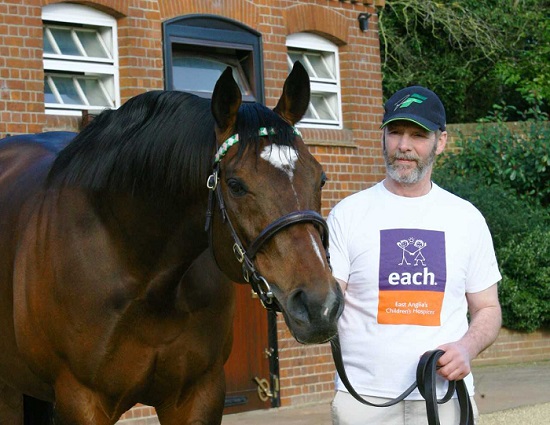 Juddmonte Farms has become the latest major supporter of Buy a Brick, the online fundraising initiative to support building of a new children’s hospice in Norfolk.

East Anglia’s Children’s Hospices (EACH) launched the campaign on the same November day that foundations were dug out for its purpose-built hospice in Framingham Earl.

Work started after the nook appeal reached £7 million. EACH needs to raise £10 million in total and Buy a Brick is among the simplest but most effective ways of helping it raise the remaining funds.

So far individuals, community groups and businesses have bought 98 bricks, bringing in £16,420.

Juddmonte Farms has contributed £1,000 by buying a special gold brick. The award-winning horse breeding farm in Newmarket is home to legendary stallion Frankel, who is an EACH Ambassador.

Simon Mockridge, UK Stud Director, said: “Juddmonte has been a proud supporter of EACH for six years and we’re particularly honoured by Frankel’s role as Ambassador. We’re very pleased to donate a gold brick and look forward to continuing our support of this fantastic charity that provides such an excellent service to local children and their families.”

Hannah Bloom, EACH’s Capital Appeal Project Lead for the nook, said: “Juddmonte’s support of EACH has always been fantastic and we’re delighted it’s now extending its support to Buy a Brick, joining the New Homes Group and Ridgeons in buying a gold brick.

“The nook is being built on a five-acre site. It will be spread across a single floor, have more areas for clinical care than our current Norfolk hospice in Quidenham, a hydrotherapy pool, state-of-the-art sensory room, larger and better equipped en-suite bedrooms, dedicated therapy rooms and much more. It really will transform children’s palliative care in the county.”

Bricks can be bought in memory of a loved one, as a gift or to visibly show support, for £20 – name on a brick – £100 – name alongside a message – £500 – name, message and an image or logo – or £1,000 – a special GOLD brick for those who really want to stand out. The package also features a bespoke printed certificate and an invitation to visit the nook once building is complete. To get involved in this exciting online campaign go to www.each.org.uk/buyabrick.

For more information about the nook appeal visit www.each.org.uk/the-nook.