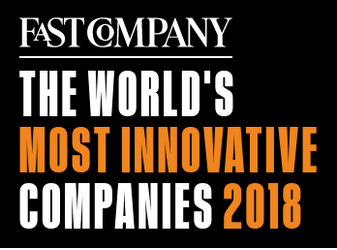 Darktrace, the world’s leading AI company for cyber defence, has announced that it has been named one of Fast Company’s 50 ‘World’s Most Innovative Companies’ of 2018 , alongside Apple, Amazon, Netflix, and Instagram. Darktrace was the only cyber security company on the list, and ranked 3rd in the ‘Artificial Intelligence’ category.

In its 11th year, Fast Company’s  ‘World’s Most Innovative Companies’  ranking celebrates impactful innovation and recognizes companies that are redefining industries and solving decades-old challenges. More than three dozen Fast Company editors, reporters, and contributors surveyed thousands of companies across 36 categories to identify the most notable innovations of the year.

“Darktrace’s Enterprise Immune System slows attacks on computing systems by emulating the way humans fend off viruses,” commented Fast Company. “The AI-enabled platform embeds in a network, learns what be­­haviors are normal, and flags anomalies. It became more formidable last April with the launch of Antigena, which automatically stops or slows compromised networks and devices.”

“To be named as the only cyber security company on Fast Company’s ‘World’s Most Innovative Companies’ 2018 list is a recognition of the fundamental power of our AI technology, which has ushered in a new era for cyber defense,” commented Nicole Eagan, CEO at Darktrace. “Our talented mathematicians have overcome a massive engineering challenge by developing the world’s first technology that can autonomously defend complex networks against sophisticated cyber-threats from within. We are honored that Fast Company has recognized the waves of innovation Darktrace has brought across the industry.”