UK’s position as a destination for renewable energy improves 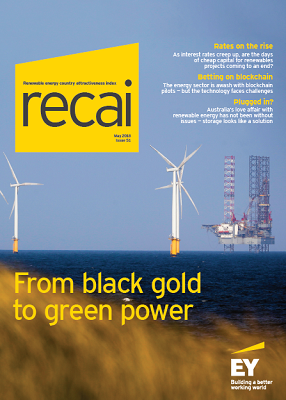 Now in its 16th year, the bi-annual RECAI report ranks 40 countries on the attractiveness of their renewable energy investment and deployment opportunities.

Despite a large drop in renewables investment in 2017, the UK has improved its position. Between 2015 and 2017 Renewable Obligation Certificates (ROC) closed to all new generating capacity, which provided subsidies to renewable energy projects in the UK. It was widely expected that many projects would be unable to compete in this post ROC environment but many of the new projects are beginning to compete in this new world.

Using artificial intelligence (AI) the project allows customers with renewable energy supplies and battery storage to sell surplus power directly to their neighbours. Thirteen blocks of flats on Hackney's Banister House Estate have been fitted with solar panels, and using Verv's trading platform, energy is allocated to residents based on their needs.

Ben Warren, EY Global Power & Utilities Corporate Finance Leader and RECAI Chief Editor, says: “Companies need to start experimenting with blockchain, to start to understand its potential in their existing business and new applications. This understanding needs to take place at the highest level of the company, and not just be delegated to the IT department – blockchain has to be on the C-suite agenda.”

China tops the latest index for the third time consecutively, with the US and Germany overtaking India which falls from second to fourth position. The Netherlands is a notable climber, while Taiwan has re-entered the bi-annual top 40 after a couple of years.

The Index highlights the trend for rising protectionism across the renewable energy sector. India’s 2022 solar power target looks increasingly over-ambitious amid investor concerns in response to the threat of a 70% tariff on imported solar panels and unsustainably low power bids. And in January this year the US imposed tariffs on imports of solar PV cells and modules set at 30%. However, RECAI points to the resilience of the US market, which climbs from third to second position as the solar tariffs are mostly absorbed and wind projects are spared subsidy cuts in the Tax Reform Bill.

Warren adds: “Rising interest rates are likely to raise the cost of cheap capital that has underwritten the dramatic roll-out of renewable energy capacity over recent years. Government subsidies for clean power are being reduced around the world and financiers are anticipating tougher times ahead for project developers. However, movements in the Index suggest that these developments are just headwinds as the renewable energy sector continues to mature and markets expand.”

Rapid expansion of renewables sees the Netherlands climb from 15th to 9th position since the last Index was published in October 2017. Recent offers for unsubsidised offshore wind and a growing solar PV market have been strong contributors to the sector, while the government seeks to meet its 14% European Union target by 2020.

Taiwan has re-entered the top 40 in 31st position, as the government takes action to increase renewables to 20% by 2025, especially via offshore wind, and announces its intention to go nuclear-free.

Warren says: “While the current economic climate has driven a relentless focus on costs, that focus is paying dividends with the global cost of electricity from renewable sources falling year-on-year. Combined with the plunging cost of battery technology, we anticipate further rapid growth of the evolving renewable energy sector in the coming years.”

The latest RECAI also explores the trend for many of the world’s largest oil and gas companies to increasingly make significant investments in low-carbon energy. But while the Index points to concerns around climate change and the rise of electric vehicles as drivers for long-term ambitions to invest in renewable energy, the pace of transition among oil majors remains uncertain.

For the complete top 40 ranking and further insights on the impact of blockchain on renewable energy, as well as in-depth analysis of the sector in Australia, Poland and Egypt, visit ey.com/recai