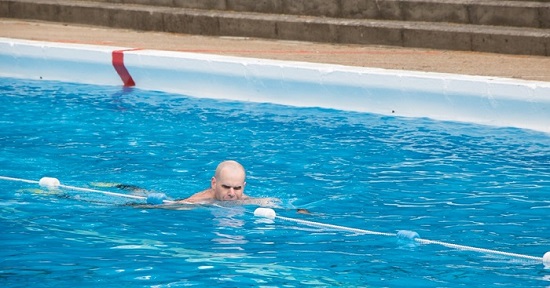 Find out more about Simon Wilkes and the 25 others who swam to raise funds for Arthur Rank Hospice on 11 May.

Arthur Rank Hospice’s community fundraisers teamed up with Better, who operate Jesus Green Lido to host their first ever outdoor swim challenge – The Big Shiver - the day before the pool opened to the public for the summer season. At 91.4 metres, Jesus Green Lido in Cambridge is four times the length of an average swimming pool. The event provided the perfect opportunity for Simon, who said: “It’s hard to find events like this that I can take part in but fortunately I signed up to the Friends of Jesus Green Lido email list and The Big Shiver popped up on there.”

Each of the participants had their own reasons for wanting to take part in The Big Shiver and those among Team Arthur’s swimmers included: a mother and son team whose husband and father had been cared for by the Hospice at Home team; Hospice staff including a nurse from the Inpatient Unit and a member of the Hospice’s Estates and Facilities Team who brought his whole family for a dip; and a team of three men who ploughed up and down the pool in pink swim hats! For Simon though - who was in the pool for the entire three hours of the challenge and swam 58 lengths, totaling a massive 5301 metres, or 3.29 miles - the event was a wonderful opportunity to indulge his love of outdoor swimming, unassisted:

“I really love open water swimming so much. It gives me such a sense of freedom and liberation. I can move in three dimensions and go under the water as well as I’m not having to always to worry about the cane in front in of me, because I’m not going to fall. It also gets me closer to wildlife and nature; being totally blind that’s not so easy.

“I stick to outdoor swimming specifically: the indoor pools are quite often full of noise and echoes, so I can’t use my hearing, but with open water swimming you can use sound navigation. Usually it’s a case of anywhere I can get to: a river; lake; the sea; a big enough pond; a lido. With Lido’s I usually pick a rainy, over-cast day: there’s less people then as all the fair-weather swimmers are put off.

“I do swim outdoors regularly in my swimming pond but it’s not as long as I’d like and it’s hard to do any distance. Quite often I do what I call a ‘dawn-chorus swim’: I slip into the pond and can hear the birds singing. In winter, I break the ice. When you do it on a regular basis you get used to the cold. I’ve had so many great experiences with open water swimming in my time: I swam with the seals off the Isles of Scilly and with a Sea Lion last year in Combe Martin, Devon. Often though with outdoor swimming you need to stick to a specific course and I need a guide. As of yet, I haven’t found anywhere I can get to, where I can swim independently.”

He adds of his experience at The Big Shiver: “I’ll definitely be signing up again next year. The people were great and the distance that I did seemed to impress a lot of them. I felt absolutely super afterwards; like I’d had a really good work out. I felt invigorated and pumped up as I often do after a really decent swim and had the perfect meal for a merman that evening: monkfish and prawns!”

Asked about what advice he would offer to swimmers interested in taking part in The Big Shiver next year, he commented: “You have to have the staying power for distance swimming in the open water, but I think the sport is something lots of people would enjoy. Access is one of main issues and there doesn’t seem to be too many blind and visually impaired people into it, but I imagine they’d really enjoy it too. Quite honestly, I’d recommend The Big Shiver to anyone who can swim a reasonable distance, especially if they’re interested in getting into open water swimming but they’re not quite sure and want to try it out. I’d say absolutely go for it! “

Community Fundraiser for Team Arthur challenges at Arthur Rank Hospice, Amy Bidwell adds: “Whilst Jesus Green Lido wasn’t quite as cold as Simon is used to – and actually was a bit warmer than the usual water temperatures at this time of year, hitting 15 degrees C rather than just 8 - it was a still a huge challenge for all those taking part. From what we’ve been told, the initial shock of it was the hardest part and then we were told that ‘it’s okay once you’re in’. We’re not so sure about that and are full of admiration for all of those who took the plunge with The Big Shiver for the first time ever. Collectively it looks like we’ll have raised at least £2000 for the Hospice - they’re all Team Arthur heroes!!”

If you’re someone who prefers to be in water rather than on land, you can find out more about Arthur Rank Hospice’s upcoming swimming challenges at arhc.org.uk/swim.asp including The Gold Swim Challenge, which runs throughout 2018. The Hospice also offers a huge range of runs, skydives, cycles and treks for supporters wishing to challenge themselves whilst raising funds for the Charity to help make every moment count for those who need Arthur Rank Hospice’s care, for more information contact Arthur Rank Hospice at www.arhc.org.uk/challenges.asp or phone the Fundraising  team on 01223 675888.