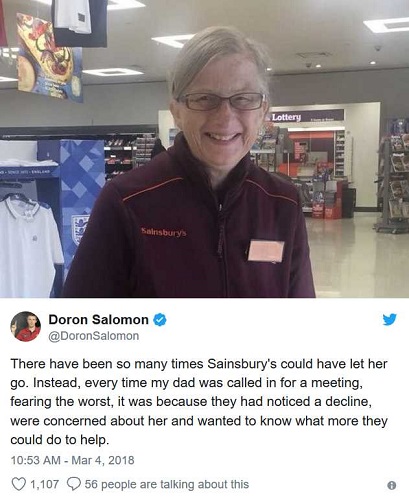 Devoted son Doron Salomon, whose story captured the hearts of the nation when he thanked Sainsbury’s for ‘going above and beyond’ to support his mum following her Alzheimer’s diagnosis, is calling on Cambridge residents to vote for Alzheimer's Research UK to become the next Local Charity of the Year at three Sainsbury's stores.

Doron and his family were ‘astonished’ by the lengths the Sainsbury’s store in Kenton went to, to keep his mum, Yvonne, in her role once she had been diagnosed with Alzheimer’s in 2013. As her symptoms progressed, the store did everything they could to keep Yvonne working, from changing her hours, adapting her role and even creating a new post cleaning totes, which was more suited to her declining abilities. After the 61-year-old completed her final shift in March this year, Doron praised the supermarket chain on Twitter and the story made national news.

Now the Salomon family are hoping Sainsbury’s stores will continue the fightback against dementia by fundraising for the UK’s leading dementia research charity over the next year. Alzheimer's Research UK is in the running to become the new Local Charity of the Year at the following Sainsbury's stores and the family are urging you to go and vote for the cause here: www.sainsburyslocalcharity.co.uk

Doron, 29, said:“We never expected Mum to be at Sainsbury’s for as long as she was. As her Alzheimer’s symptoms got worse, she would forget to clock in and out, or she would find herself lost in the store, so we were astonished by everything the store did to keep her on. It was so important for Mum to have a job, it gave her a purpose and she took real pride in it. The position meant she was identical to her friends, she could talk to them about her job – it was the one thing she could talk at length about.

“We’re so grateful for everything Sainsbury’s has done for our family. Not only did the job give my mum something to focus on, it also helped to raise awareness of dementia in the store and following the tweet, with the wider public too. But what needs to come next is a cure for Alzheimer’s, it frustrates me that there isn’t one already. I sometimes think back to diseases that were once deemed incurable, but then the breakthroughs came and it’s no longer the case. I have to be hopeful we can do the same for Alzheimer’s. That’s why, as a family, we’re urging you to vote for Alzheimer's Research UK to become the next Local Charity of the Year at your Sainsbury’s store.”

Lucy Squance, Director of Supporter-led fundraising at Alzheimer's Research UK, said: “It’s so inspiring when we hear stories like this one. Sainsbury’s really did go above and beyond to support Yvonne and her family. But tragically, this isn’t possible for every single person living with dementia today. There is currently no cure for the 850,000 people in the UK with dementia, but through the power of research we can change that. It’s our mission to bring about the first life-changing dementia treatment by 2025, but we can’t do it alone. So please vote for Alzheimer's Research UK to become the next charity partner of your Sainsbury’s store and join the fightback!”

You can vote for Alzheimer's Research UK until Sunday 24 June in store or online at www.sainsburyslocalcharity.co.uk