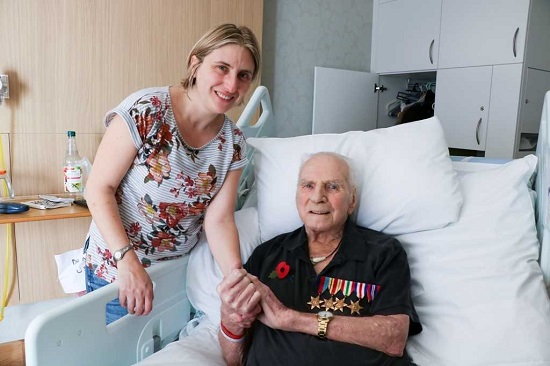 Ahead of Remembrance Sunday this weekend and the 100th anniversary of the end of the First World War, one of the oldest surviving veterans of World War II tells his story after being cared for at Arthur Rank Hospice...

Mr James Sutton (Jim) now 96, is one of the oldest surviving veterans of World War IIin the area. He was recently cared for in the Ward at Arthur Rank Hospice, having been referred from Addenbrooke's Hospital.

His granddaughters describe him as “always having been very dapper”. They took care to make sure he was surrounded by a few of his most treasured possessions whilst he was in the Hospice.  His bed is turned towards the patio windows, giving him a view of the Hospice gardens. Facing back into the room, on a cabinet, is Jim’s framed display of five World War II medals. He points a finger to each medal in turn and explains:

“That’s the King George V Imperial War medal: that ones for being in the War at all. They weren’t so much what we did, they were more about where we were when we did it. That’s from France and Germany (when all the troops were doing ashore in Normandy, my action station was up on the upper deck bridge with twin mounted Lewis machine guns); that’s from the North African Campaign; and that’s the Italian-Sicilian campaign - we invaded and got them back; and that’s the Four Years War [the 1939-1945 Star].”

At the age of 18, Jim joined his Ship HMS Valiant at Davenport. He explains:

“When I first picked up my ship, HMS Valiant, she was just finishing a refit in Davenport Naval Dockyards and as a result of that refit she turned out to be the most heavily armed ship in the fleet. When I joined my ship, there were four of us: HMS Valiant, HMS Warspite, and then there was HMS Rodney and HMS Nelson.

“They comprised what we called Force H. Based in Malta, it was our job to go in and sort out any problems in the Mediterranean. We had this call that they were having a bit of bother in Italy, getting the troops ashore at Salerno Bay. So away we went.

“Now, the bay itself was a huge area and behind the bay was a range of mountains. Behind the mountains was a German airfield: their planes were coming under the mountains up and over and strafing all the troops when they were trying to land. They were giving them a hell of a time and we were asked to go in and sort it out.

“We sailed into the Bay, full of shipping merchants, troop ships, supply ships… you name it. We dropped anchor facing the Bay and we sent a Marine Spotter Team ashore, to find out what was going on. They went ashore into the mountains and discovered there was indeed a German airfield behind the mountains. They were coming up and over and down and attacking, before our radar could pick them up. The Spotter Team radioed the coordinates back to us and then the Captain broadcast to all the shipping in the area: “We’re going to loose off a ranging shot from the 15-inch guns, so be aware: you will want to move your ships.”

“I don’t know whether you know it, but a 15-inch projectile gun shell, it weighs exactly one tonne. We had eight of them; that’s eight tonnes. The Captain let go this ranging shot – one shot, “boooom” - and off it went. By the time the echoes had died away, there weren’t very many merchant ships left – they had left [the Bay]. We got the recovery coordinates from that, so he then broadcast out across the whole area “Right, we’re going to loose off now with Salvos”. That’s eight 15-inch guns - that’s eight tonnes; and 2 salvoes: that’s 16 tonnes of high explosive on a pinpoint target!

“They reported back that where the German airfield had been, it just wasn’t there anymore: it was just one huge gaping black hole, in the ground, that’s all – gone, psch - gone. That is why naval shelling is so dreadful: it’s on a pin-point target; sixteen tonnes… in one blow.  Have you seen the blast-off at Cape Canaveral? It’s like that, it’s a countdown... and boom… boom.”

When asked about how he felt about it at the time, Jim responds:

“You had a job to do and you just got on with your job, that’s all. Part and parcel of it. While that was blasting off, I was in our 4.5gun turret. I was a gun lag, firing the guns.  You were given a job to do, so you did it. That was the attitude towards it.  You didn’t think about it.”

Pulling out a selection of palm-sized sepia photos from their small brown cardboard photo album, he goes on:

Does he feel proud of having served his country?  Jim’s answer is a modest one:

“It wasn’t just me - there were lots more like me.”

Having had his symptoms stabilised - thanks to the expertise of Arthur Rank Hospice’s doctor and nurse team – Jim was discharged from the Hospice’s care on 2 November 2018. He and his granddaughters are planning to mark this Armistice Day together, with a small but special celebration in his Cottenham Court Nursing Home.

Sara Robins, Clinical Director at Arthur Rank Hospice explains how learning more about a person’s personal story and history is integral to the care that the Hospice delivers:

“Personalised care underpins the very foundations of everything the hospice does. Our nurses, healthcare assistants, doctors, therapist and volunteers make a point of chatting to patients on their level, so they can find out what is important to each different person. It’s very much a two-way communication stream which makes sure those little touches can happen, like Jim being able tell his story, at a time when his World War II experiences are in his mind. It’s been fascinating to learn more about where he served and what he did, and we’re delighted to share his story.”

Arthur Rank Hospice cares for more than 3600 patients each year across the Hospice in Cambridge, the Alan Hudson Day Treatment Centre in Wisbech and in patient’s own homes via the Arthur Rank Community Team. As a charity, it needs to secure £8.1 million every year to deliver its services free of charge to patients and their loved ones. Around half of this currently comes from commissioned income, so the Charity remains hugely grateful to the local community which contributes the remainder and whose support is critical in helping make every moment count.

Image (top): Mr James Sutton (Jim), who is one of the oldest surviving veterans of World War II, with his granddaughter Francesca.  He and his granddaughters will be markingArmistice Day together, with a small but special celebration in his Cottenham Court Nursing Home

Image (inset): Left to right: The 1939-1945 Star; the Africa Star; the Italy Star; the France and Germany star; King George V Imperial War medal. Jim comments: “They weren’t so much what we did, they were more about where we were when we did it.”