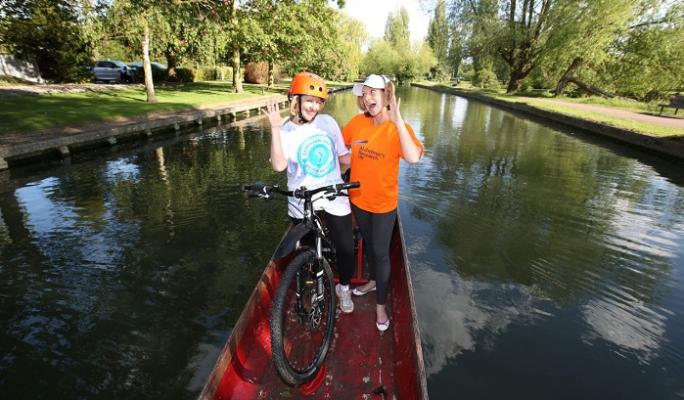 Staff from Hidden Hearing in Cambridge will be playing their part in a three-month branch-to-branch charity relay on Friday (31st May 2019), raising money for Alzheimer’s Research UK and handing out oranges, in support of the Campaign for Better Hearing.

Branch Staff will be raising money as they pedal on an exercise bike at the Grafton shopping centre in Cambridge. Locally based ARUK will also be attending to get involved and meet the public. But why the oranges?

For some, problems with hearing may lead to social isolation or depression, both of which have been linked to an increased risk of dementia. However, a recent survey by high street hearing experts Hidden Hearing showed that 84% of British people don’t know about the link.

Through damage caused by the disease, the brain of a person with Alzheimer’s can weigh around 140 grams less than a healthy brain – about the weight of an orange. Alzheimer’s disease is the most common cause of dementia, a condition which affects almost 1million people across the UK.

Hidden Hearing will be on the road for three months, stopping in 49 towns and cities throughout the UK, spreading the message to test your ears at 55 years!

Audiologist, Ellie Parker of Hidden Hearing in Cambridge said: “We’re thrilled to be part of this campaign, raising funds for Alzheimer’s Research UK and talking about the links between hearing loss and health within the community.  The message is simple, regular hearing checks are important and we want to encourage everyone to test their ears at 55 years!”

The Campaign for Better Hearing Roadshow will be outside Debenhams in The Grafton Centre from 9.30 to 4.30pm.  People are invited to pop along for a free hearing screen and meet the team – and even join in the relay by having a stint on the exercise bike themselves.

Better still, just by popping along you could be one of five lucky people each month to receive a free pair of private hearing aids, thanks to Hidden Hearing’s support of this campaign.

Ellie Parker continued: “Four in 10 people over the age of 50 have hearing loss and many don’t realise it. And even if they do, they may wait for up to seven years to have their hearing tested. At Hidden Hearing, we want to smash taboos and make having your ears tested just as regular an occurrence as having your eyes tested!”

The Campaign for Better Hearing: https://campaignforbetterhearing.co.uk