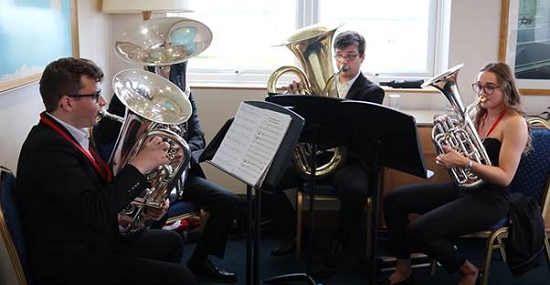 Who would have thought that a car fleet management company, Marshall Leasing whose head office is in Huntingdon, Cambridgeshire, would have come to the rescue of a brass quartet, ‘When Tuba Come One’, becoming winners of the International Tuba Euphonium Ensemble Association (ITEA)?

Sales and Marketing Director of Marshall Leasing, Jonathan Ross was introduced to founding member of ‘When Tuba Come One’, Amy Ewen, through her father, who has long-standing relations with Marshall Leasing.

The four talented musicians who study at the Royal Birmingham Conservatoire looked to fundraise in order to attend the ITEA which took place at the University of Iowa, United States.  The tuba quartet  - consisting of Amy Ewen, 21 (baritone), Ben Smith, 19 (euphonium) and tuba players James Hobbis, 23, and Mark Dilley, 22 - began advertising their GoFundMe page, as well as creating adverts for their trip which were distributed across all Birmingham universities and an array of conservatoires across the UK.

Born in Hampshire, Amy was first introduced to the world of brass at the tender age of eight, where she started playing the euphonium under the guidance of Simon Wyld.  Along with playing for ‘When Tuba Come One’, she also plays for the Grimethorpe Band which is the most famous brass band in the world.  Also growing up in Hampshire, Mark started his musical journey on piano, aged 6.  Mark also plays in Curzon Brass, a brass quintet which often plays in an exciting variety of concerts across the country and recent winners of the Leamington music prize.

Brought up in Northamptonshire, Ben started off his banding with his parents in the local Harborough Band  on percussion. Ben is now in his 2nd year of study at the Royal Birmingham Conservatoire, enjoying his tuition under Matthew White.  Hailing from North-East London, James began his playing career through the Redbridge Music Service on the Baritone horn.  Now studying for a Master’s degree with scholarship at the Royal Birmingham Conservatoire, under the guidance of Graham Sibley and Les Neish, James does regular work as a freelancer.

To attend the ITEA, the tuba quartet calculated that they needed a sum of £4,000 to cover their overhead costs.  Marshall Leasing recently celebrated their combined total leasing of 50,000 vehicles with VIP attendees at Cambridge Airport on Friday May 17th 2019, where ‘When Tuba Come One’ performed renditions of songs such as ‘Those Magnificent Men in their Flying Machines’.  As a result of the tuba quartet performing in front of VIP guests and partners of the Marshall Motor Group, Marshall Leasing was able to provide a significant contribution to the talented musicians for them to participate in the ITEA.

Upon arriving in the United States, ‘When Tuba Come One’ were asked to record a song and be critiqued, which saw them reach the semi-finals where 12 other quartets from all over the world were competing against them.  Of these quartets, four were selected for the final including ‘When Tuba Come One’, where a live performance took place for the chance to claim first prize and $2,000 in winnings.  The tuba quartet were crowned winners of the IETA with their rendition of a Spice Girls classic, and the only representatives for Europe to receive an award.

Upon winning such a momentous achievement, founding member and baritone player Amy Ewen said, “We just thought, we’re only in America once and we’ve worked so hard to get here so we just wanted to enjoy it, no matter the result.  We were privileged to even get through to the semi-finals, let alone win the competition.  It was a bit of a whirlwind and went so quickly.  This has given us a massive confidence boost which will sit long in the memory.

“We couldn’t have come this far without the overwhelming support of Jonathan Ross and Marshall Leasing.  They’ve really put themselves out there to help us succeed – by giving us an array of ideas on how to raise additional funds to support our music, as well as elevating us to perform at the highest level.  It was an honour to play at Cambridge Airport on such a special day for the Marshall Motor Group, and I hope that by winning this award all of their support for us has really paid off.”

Sales and Marketing Director of Marshall Leasing, Jonathan Ross said, “I’m so proud of ‘When Tuba Come One’.  They’re a highly talented group of young people and their recent success in America highlights how well they work together.  On behalf of Marshall Leasing, we are thrilled to have contributed to helping ‘When Tuba Come One’ achieve all that they deserve.  We cannot wait to collaborate in the future.”

Image: Amy Ewen (right), with band members of ‘When Tuba Come One’.