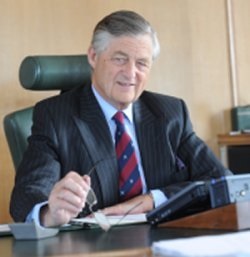 Sir Michael Marshall, the President of Marshall of Cambridge, has died while on holiday in Spain, aged 87.

In a statement, the company said: “On behalf of his family and Marshall of Cambridge, it is with the deepest regret that we confirm the sad news of the death of Sir Michael Marshall CBE DL. Sir Michael died on Saturday evening, while on holiday in Spain with his wife, Sibyl, and friends.

“While it is too soon to confirm any arrangements, it is anticipated that there will be a small, private funeral followed by a memorial service later in the year, details of which will be announced when they have been fixed.”

"Sir Michael, who was described as a 'dynamic force for good', was one of Cambridge’s most popular business leaders and remained active in both community events and charitable activities," said the Cambridge Independent yesterday (Sunday).

Tony Quested of Business Weekly wrote: "Few would argue that, despite the company’s century-plus 109-year-old history, it was Sir Michael’s foresight and steady hand on the tiller that turned the company into a business of our times and a force for the future. The aerospace and defence group has become a world leader, the Motor Group has been spun off, floated on the London Stock Exchange and through acquisition has become a UK powerhouse...

"Having taken Marshall of Cambridge into a global elite of highly respected businesses in the view of world governments and major corporates, Sir Michael never lost sight of what he felt was his role in promoting Cambridge on a wider stage."

Claire Ruskin, CEO of Cambridge Network, said: “We will keep memories of Michael alive with the knowledge that we were still working, dancing and laughing with him in the past month – a wonderful man. We are all better for having known him.”

Cambridge MP Daniel Zeichner said: "I am so sorry to hear the sad news about Sir Michael Marshall, and my sympathy goes out to his wife and family. We had very different politics, but Sir Michael has always been warm and courteous to me, and he genuinely cared about Cambridge and the place that the company has in Cambridge life. Cambridge is the poorer for his passing."

Read the tributes to Sir Michael: