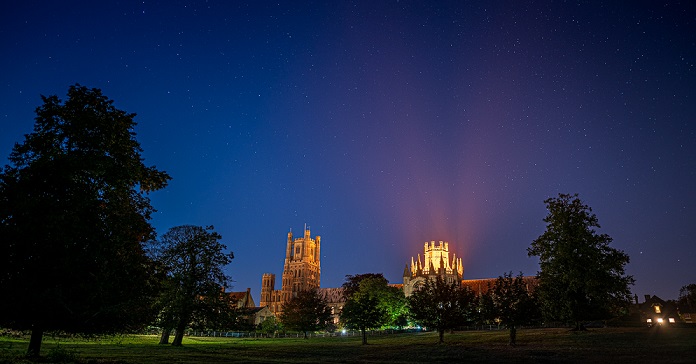 Alzheimer’s Research UK (ARUK) teamed up with Ely to illuminate the iconic Ely Cathedral in orange on Saturday (21 September), to shine a light on its #ShareTheOrange dementia awareness campaign, as part of World Alzheimer’s month.

The momentous orange illumination of Ely Cathedral aimed to put a spotlight on dementia awareness and tackle the serious misconception that dementia is an inevitable part of ageing.

The #ShareTheOrange campaign uses an orange to symbolise the weight of matter lost in the brain as the condition develops, putting a spotlight on the fact dementia is caused by physical diseases. The damage to a brain with Alzheimer’s can leave it weighing 140g less than a healthy one – about the weight of an orange.

Despite dementia now being the UK’s leading cause of death, a recent poll found that 22% still incorrectly believe that dementia is an inevitable part of old age. Alzheimer’s Research has joined forces with Samuel L. Jackson  for the #ShareTheOrange campaign to highlight that physical diseases cause dementia using an orange to symbolise the weight of matter lost in the brain as the condition develops.

In the campaign film here, Samuel explains: “The damage to a brain with Alzheimer’s can leave it weighing 140g less than a healthy one. That’s about the weight of an orange…this shows us it is a physical disease…”

Samuel goes on to describe how: “dementia strikes at humanity’s most valuable resource, the cells of a human brain…it destroys these precious cells and the links between them.”

The #ShareTheOrange film ends with hope as Samuel L. Jackson states: “…with research we know diseases can be slowed, they can be stopped.” He calls on the public to share the film to “change the conversation and help Alzheimer’s Research UK make these breakthroughs possible for dementia”.

Samuel’s family has been impacted by Alzheimer’s more than most, having had six relatives diagnosed with the disease. He said: “I’ve been surrounded by Alzheimer’s most of my life. My grandfather was my best friend growing up, so it was heart breaking for me to see him not know who I was. The same happened with my mother soon after she was diagnosed. Her mother had it, her brother had it, her sister had it, and so did my aunty on my father’s side. It is so cruel having someone who has nurtured you and taken care of you reach a point where they can’t even recall your name.

“It’s been proven from other diseases throughout history that where there is research, there can be a cure. Where there is research, there is hope. By sharing the knowledge that diseases like Alzheimer’s are not simply part and parcel of old age, we have the power to push research forward and put an end to this devastation. We must act now to speed up research towards breakthroughs.”

Hilary Evans, Chief Executive of Alzheimer’s Research UK, said: “We want to to put a spotlight on the seriousness of dementia and the huge impact it has on local communities. We hope turning Ely Cathedral orange drives intrigue in our ‘ShareTheOrange’ campaign.

“Research has made major breakthroughs in other disease areas in recent years and we can do the same for the diseases, like Alzheimer’s, that cause dementia. Our scientists are already making vital discoveries and with more support for their work, we can turn discoveries into life-changing breakthroughs more quickly.”

“Alzheimer’s Research UK relies almost entirely on public donations to support its work, and the enduring misconception that dementia is an inevitability hinders our ability to recruit volunteers for research, secure funding and press for further government support for research.

The Very Reverend Mark Bonney, Dean of Ely, said: "Ely Cathedral welcomes the opportunity to help raise awareness of this devastating disease which consumes the lives of both those living with Alzheimer’s and their families and loved ones. Lighting the Octagon Tower orange for World Alzheimer’s Day is a small gesture in support all those affected by this condition and the vital work being done by Alzheimer’s Research UK to find a cure.”

Alzheimer’s Research UK is the UK’s leading dementia research charity and last year pledged to commit a landmark £250m of funding towards pioneering medical research into the condition by 2025.

Dementia is the world’s greatest medical challenge, not only for the individuals affected and their families, but for society as a whole. Over 850,000 people in the UK have dementia, and the condition has an economic impact in the UK of over £26bn a year – more than cancer and heart disease combined.