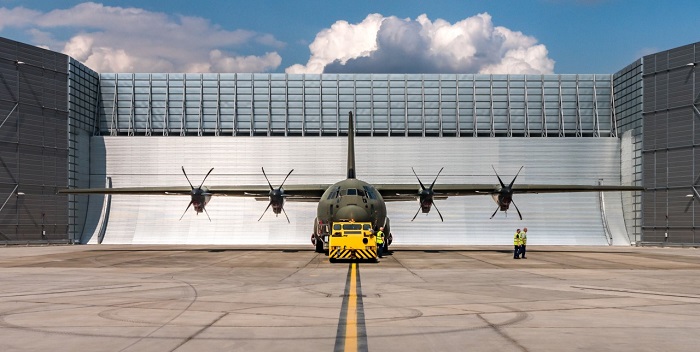 Marshall Aerospace and Defence Group has installed the largest fully-enclosed engine test structure in Europe at its UK headquarters in Cambridge.

The new Ground Running Enclosure (GRE), which is the size of a football pitch, significantly reduces noise during aircraft ground testing and can accommodate aircraft up to the size of a Boeing 747-400.

The multi-million pound structure significantly reduces noise impact in the immediate vicinity of Cambridge Airport where most of Marshall ADG’s specialist applied engineering work is undertaken on aircraft from across the globe.

Marshall ADG CEO, Alistair McPhee, said: “It’s a very exciting development for us. This facility gives us great flexibility in terms of the breadth of aircraft it can accommodate, while at the same time ensuring we are living up to our commitment to reduce any potential noise pollution for our neighbours.”

The new GRE is 90m wide and 20m high and enables conditioning of the airflow to the propellers and jet engine intakes. Construction began in May last year by Blast Deflectors, Inc. who are world leaders in solutions for reducing aircraft noise. It will be fully up and running by the end of October.

Additional facts: Contains more than 10,000m3 of concrete and 654 tonnes of steel reinforcing. The doors weigh 200 tonnes and are operated on a rail system. The rear wall has jet blast defectors, which directs the airflow upwards. Its walls incorporate noise absorbent panels.