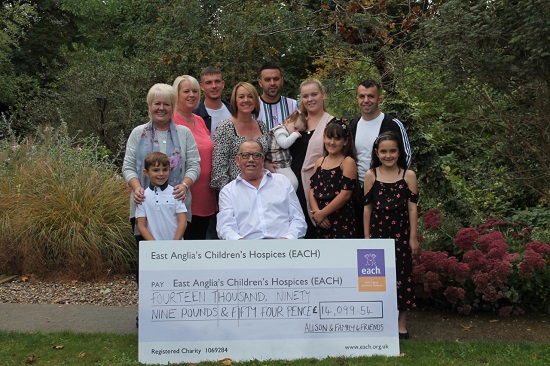 A family from Hemingford Grey and their friends have presented East Anglia’s Children’s Hospices (EACH) with a cheque for £14,099.54 in memory of Samantha Desborough.

The beloved 15-year-old, known more affectionately as Sammy, died in April 2014. She was diagnosed with Lennox-Gastaut syndrome, a severe form of epilepsy, when she was six months old and had profound and multiple learning difficulties. It meant Sammy suffered from regular seizures and required 24-hour care. Nonetheless, she was a popular girl in and around St Ives, touching the heart of everyone she met. At the end of her life, her family used EACH’s hospice in Milton and were so grateful for the care and support they continue raising money for the charity today.

The first of thousands they have collected came from Sammy’s funeral whilst most of the money has come from an annual disco around the time of her birthday, often generously supported by shops and performers. Among other fundraising methods, one family friend has done the Perkins Great Eastern Run, in Peterborough.

Sammy’s family and friends recently attended a special memory day at the hospice in Milton to hand over the cheque.

Sammy’s mum, Alison Frear, said: “The care Sammy received and the support for family and friends was absolutely amazing. Thanks to [EACH’s hospice in] Milton our family and friends can reflect on happy memories knowing that my darling daughter was loved and cared for in such a lovely, calm environment. Sammy first went to the hospice when she was five and this was where she passed away, surrounded by all her family and friends. They supported us emotionally and offered ideas to make memory pictures, etc. My daughter Tyra was three at the time her sister passed away and she really didn’t understand what was happening. I was given lots of advice and resources to support her in such a difficult time.

“It’s so touching that EACH hold such a beautiful memory day at the hospice every year, which my family and friends have attended every year.

“I’m so grateful to everyone who’s continued to support me over the years, with all the fundraising events in memory of Sammy, and I’d like to say a huge thank you to each and every one of you. Sammy was a very popular young lady and she touched the hearts of so many people.”

Karen Newton, EACH Cambridgeshire Fundraising Manager, said: “We rely on voluntary donations for the majority of our income, needing to bring in over £6.4 million a year from fundraising, so to receive support from anyone in the communities in which we support children and families is always greatly appreciated. It’s obviously so much more poignant, though, when people who have first-hand experience of our service decide to do something for us. In the case of Alison, her family and friends, their support has continued over a period of years and we couldn’t be more grateful. Not only have their efforts generated a fantastic amount of money, they’ve also been a brilliant tribute to Sammy.”

For more information about EACH go to www.each.org.uk