EACH receives thousands after joinery company’s ‘super summer’ of fundraising 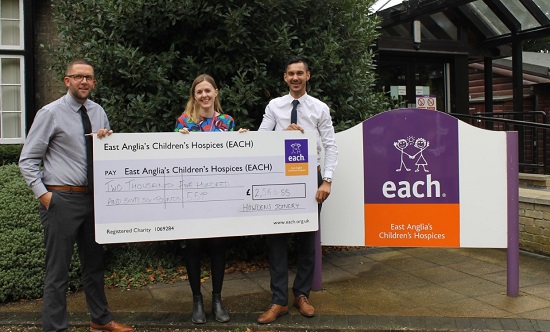 A super summer of fundraising by Cambridgeshire and Hertfordshire branches of Howdens Joinery has seen £3,036.55 donated to East Anglia’s Children’s Hospices (EACH).

A concerted effort to bring in money over two months between June and August saw the company dabble in online fundraising as well as more traditional methods like rattling collection tins. It also took donations at its trade open day.

Mark said: “For me, life is tough enough as it is and I can’t even imagine how families must feel faced with seeing their children needing the help of a hospice. Cambridge is where I grew up and I wanted to see how we could help EACH by fundraising across 21 Howdens depots. With a daughter myself, visiting the hospice I found a challenge, but I left completely overwhelmed by the atmosphere, the surroundings and the good work that goes on to support families at such a difficult time. We’ll continue to support EACH in 2020 and raise even more money to help families and, most importantly, the children.”

The business has 21 branches in its East Anglia Central division, covering Cambridgeshire and parts of Norfolk, employing a total 201 staff.

Lottie Driver, EACH Cambridgeshire Corporate Fundraiser, said: “It’s been great to see how a business focusing on fundraising in a short burst can bring such fantastic results. The efforts of everyone at Howdens Joinery are massively appreciated and it was a pleasure to welcome Mark and Ricky to our hospice in Milton.

“We estimate to receive only around 16% of our total annual costs from statutory sources, so support from the business community like this is so vitally important.”

EACH is also delighted to have received £3,750 from Jonathon Clarke, an Independent Financial Adviser from Waterbeach who competed for Great Britain at the Triathlon World Championships this year.

Jonathon generously decided to give the charity his sponsorship money, stumped up by Martin-Redman Partners, Lighthouse Advisory Partners and Rathbones, as well as friends and family.

He also had EACH’s logo alongside the British flag on his raceday kit. The event took place in Lausanne, Switzerland, and Jonathon finished an impressive 19th out of 100-odd athletes in the 35-39 age group category, despite only starting triathlon two years ago.