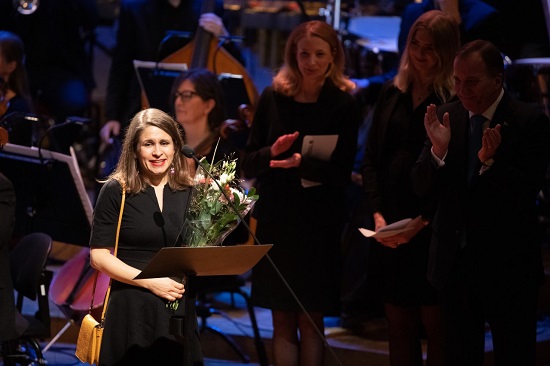 She has won the award for her picture book Alle sammen teller.

The Norwegian artist received her award, and a cheque for 350,000 Danish Kroner (approximately £40,000), from Sweden’s Prime Minister Stefan Löfven during a ceremony at the Stockholm Concert Hall.

Kristin began her illustration career at Anglia Ruskin University (ARU), where she studied for a BA (Hons) in Illustration at the Cambridge School of Art. She has since gone on to produce a number of children’s books and co-owns the publishers Magikon Forlag.

The Children and Young People’s Literature Prize was first awarded by the Nordic Council in 2013 and is presented alongside awards for the environment, film, literature and music. The Nordic Council is a body that promotes co-operation between Norway, Sweden, Denmark, Finland, Iceland, Greenland, the Faroe Islands and the Aland Islands.

The jury of the Nordic Council Children and Young People’s Literature Prize said: “The text is poetic and funny. It arouses curiosity and gives us clues for understanding what’s going on in the pictures.

“Kristin Roskifte allows both the text and images to form part of a context that is different and unique within the tradition of a ‘Where’s Wally?’ style book. It is a work that can be read time and again, and each time we discover something new.”

Martin Salisbury, Professor of Illustration at Anglia Ruskin University (ARU), said: “I’m thrilled as Alle sammen teller, or ‘Everyone Counts’, is an extraordinary book which I’m sure will go on to win many more awards.  Kristin was an outstanding student and it was students like her that encouraged me to design the Master’s degree in Children’s Book Illustration here at ARU.”

Meanwhile, 10 ARU graduates are amongst the illustrators nominated for the annual CILIP Kate Greenaway Medal, which will be awarded on 17 June, 2020.

Steve Antony (Amazing), Angela Brooksbank (B is for Baby), Eva Eland (When Sadness Comes to Call), Emily Haworth-Booth (The King Who Banned the Dark), Morag Hood (Brenda is a Sheep), Fifi Kuo (I Can Fly), Elena Arevalo Melville (Umbrella), Jessica Meserve (What Clara Saw), Beth Waters (Child of St Kilda), and Julia Woolf (Duck and Penguin Are Not Friends) are all in the running for the award, which is chosen by children’s librarians.