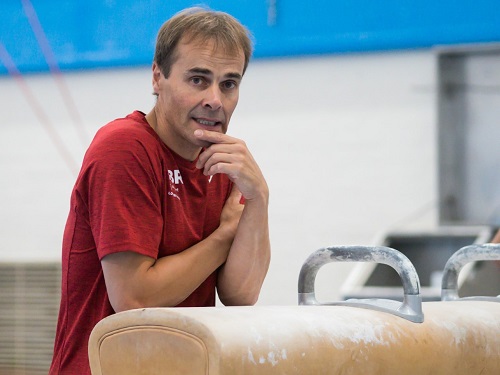 The head coach of the men’s Great Britain gymnastics team will deliver the ninth Excellence in Sport lecture at Anglia Ruskin University (ARU) in Cambridge on Tuesday, 19 November (5.15pm).

Paul Hall MBE will provide a unique insight into the world of elite sport during the free public talk organised by the Cambridge Centre for Sport and Exercise Sciences at ARU.

Paul spent 15 years as Head Coach at Huntingdon Gymnastics Club before being appointed as GB men’s head coach last year. At Huntingdon he was responsible for the remarkable success of ARU honorary award holder Louis Smith MBE, who won Olympic medals in Beijing, London and Rio.

His GB men’s team will be heading to the Tokyo Olympics next summer full of confidence and with two world champions in their ranks, thanks to the success in Stuttgart last month of both Joe Fraser and Max Whitlock MBE, who is also an ARU honorary award holder.

ARU Sports Science Lecturer Dr Francesca Cavallerio, who spent 16 years as a rhythmic gymnastics coach and worked with British Gymnastics as a national judge, supporting the selection of junior and senior representatives for international events, will host the event.

Dr Cavallerio said: “Paul will provide an amazing insight into what is needed to be the best in the world, and how he aims to build on the recent successes seen within gymnastics in this country. It promises to be a fascinating talk and no doubt Paul’s experiences of coaching at an elite level will have applications across other sports and industries.”

The free talk will last approximately 45 minutes and will be followed by questions from the audience. It is open to anyone with an interest in sport, coaching and sport performance, and will take place in room LAB002 at ARU’s East Road campus.