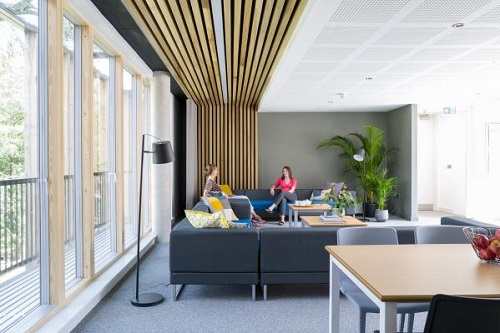 Since 1919, the Tring Park School has provided a unique education in the Performing Arts to students aged between 11-18. Tring Park nurtures creativity in a community for talented young people, who have a passion for Acting, Dance, Musical Theatre or Commercial Music.

The Mansion House, the main school building – is a beautiful baroque-style stately home, built to a design of Sir Christopher Wren in 1685. It has a splendid staircase and is often used by film crews. Sir Drummond Smith, a London banker, refurbished the interior in the Georgian style and remodelled the sprawling park in the style of "Capability" Brown. Besides its illustrious design pedigree, it has a fascinating history too, as it was a former home to generations of the Rothschild family.

Situated in an Area of Outstanding Natural Beauty in the Hertfordshire countryside, the school commissioned a new boarding house from the architects Burrell Foley Fischer, with interior design input and furniture provided by Eve Waldron Design. This historic and scenic context remained at the forefront of the interior design approach with the idea of bringing the outside in.

When responding to the brief, the team ensured that their specifications related to the overall design of the building, using materials and colours to compliment it. EWD took into consideration the natural views through the large windows and got their cues for the colour

scheme from nature beyond. Eve and her team were keen to incorporate wellbeing and biophilic principles into their design as much as possible

Biophilic design is a concept used within the building industry which increases connectivity to the natural world through incorporating the use of direct or indirect elements of nature. It is argued that this idea has health, environmental, and economic benefits for building occupants. Although its name was coined in recent history, indicators of biophilic design have been seen in architecture as far back as the Hanging Gardens of Babylon. It has been demonstrated through research that incorporating these principles can reduce stress, blood pressure levels and heart rates; all whilst increasing productivity, creativity and self-reported rates of well-being.

In the education sector, this is particularly important - primarily because of its ability to help aid concentration. Recent research has suggested that the capacity to learn is restored when students come into contact with nature, yet schools are seeing a significant reduction in their connection to the natural world due to increasing modernisation. Biophilic educational environments can enhance the academic performance and daily wellbeing of both students and staff members, including increased rates of learning 20-25%, improved test results, concentration levels and attendance, and reduced impacts of ADHD.

With this in mind, EWD provided a scheme with natural materials, colours and textures in mind – materials included natural oak joinery, and a palette of calming greens and blues, as well as lots of plants within the scheme. Using plants within an educational space not only looks good and soothes but also boosts the oxygen levels.

The boarding house had to provide spaces that were both restorative for boarders, conducive to studying, and fit for purpose – the school wanted the furniture to be robust and last. Eve has a background in industrial design and coupled with a great team - they designed and engineered the furniture, built and tested prototypes until it was perfect. Eve said,

“Our practice takes sustainability seriously – we consider well-made furniture to be the first principle. We don’t condone a throwaway culture and faddish design”

By selecting complimentary loose furniture that is built to last, the team ensured that the finished spaces were as sustainable as possible. Her team also provided window treatments along these same lines – which will last longer, which avoids the need to constantly replace pieces. This makes good business sense too and saves money in the long run.

Since opening for the start of the new school year, Elizabeth House has proved extremely popular amongst students, parents and staff alike.

Anselm Barker, Tring’s Deputy Principal, said, “Eve and her team were a pleasure to work with... We are delighted with the result and the feedback from pupils, parents and staff has been overwhelmingly positive..."

Eve Waldron Design is a workplace and educational design practice, as well as a furniture consultancy - sourcing and supplying commercial furniture. Founded in 2000, the practice has won numerous design awards. They support sustainable, practical design dedicated to improving the spaces we work in. Good design is people centric, and improves wellbeing while adding value to businesses and improving their productivity. Good design starts with great space planning, and we can add value with our early involvement.