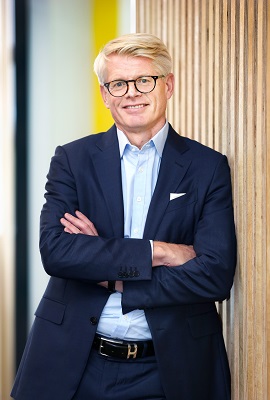 CMR Surgical, the company developing, manufacturing and marketing the next-generation surgical robotic system, Versius®, today announces the appointment of Per Vegard Nerseth as Chief Executive Officer, effective 1 January 2020. Martin Frost will remain Chief Executive Officer of CMR until this date before transitioning to a Non-Executive Director role at the Company.

Per Vegard Nerseth has more than 25 years of significant growth and business scaling experience in the field of robotics. He joins CMR from ABB, a world leading manufacturer of industrial robots and robot systems. For the last nine years he served as Senior Vice President and Managing Director of ABB Robotics, a multi-billion dollar business unit with more than 7,000 people in 53 countries. During his tenure, ABB Robotics achieved double digit sales growth while making significant operational efficiencies. Prior to this Mr Nerseth established ABB Engineering’s Robotics division in China, growing it to become the number one robotics business in China. Mr Nerseth’s strong track record in scaling robotics will further support CMR’s accelerated growth trajectory as the Company works to bring minimal access surgery to everyone who needs it around the world.

Martin Frost co-founded CMR in 2014 and has been CEO since the Company’s formation. During this time he has driven CMR to the point of commercialisation whilst attracting investment of a record-breaking £195 million in the Company’s Series C financing round, which valued the business at more than £1 billion.

Martin Frost, CEO of CMR Surgical, said: “I am extremely proud of what we have achieved to date at CMR and I am delighted to be handing the CEO reins over to Per Vegard, who will lead the company to the next stages of its maturity. Per Vegard has strong experience in manufacturing and robotics at a multi-national level, which makes him the perfect candidate to take over. I look forward to continuing my involvement with the Company as a Non-Executive Director.”

Per Vegard Nerseth added: “I feel privileged to be joining this vibrant, rapidly growing, world-leading company at such an exciting stage in its development. I look forward to using my previous robotics and manufacturing experience to contribute to the future of CMR.”

Erik Langaker, Chairman of CMR Surgical, commented: “On behalf of the Board and all shareholders, I would like to thank Martin for what he has achieved in building the business and leading what has been a rapidly growing team over the past five years. Martin has been instrumental to the success of CMR and our value based approach to healthcare and we are delighted to retain his expertise on the Board of Directors. I would also like to warmly welcome Per Vegard who will lead us through the next stage of CMR’s exciting journey. His long tenure with ABB, a world leader in designing, manufacturing and commercialising robotic solutions, will strongly complement our existing expertise to cement CMR’s position as a global player in surgical robotics.”