From laser beams to proton beams: how 'Star Wars' continues to predict the science of the future 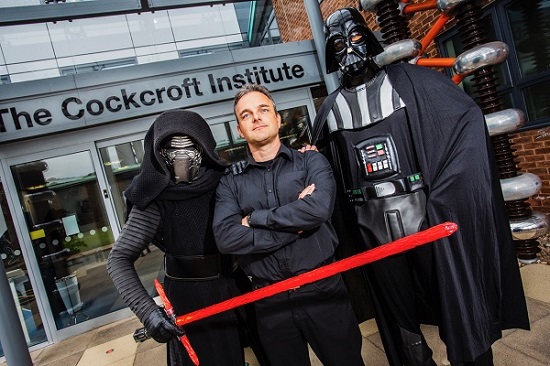 With the next Star Wars blockbuster hitting the big screen,  scientists have revealed how, over the past four decades, the science fantasy of the films has predicted some of the biggest scientific breakthroughs of this generation.

Using proton beams to destroy a target and working alongside AI-enabled robots might have seemed more at home in Star Wars fiction than in reality a few years ago – but not any longer. Scientists at The Cockcroft Institute have revealed that budding scientists should take a closer look at the film franchise if they want to get a glimpse of the future.

Professor Carsten P. Welsch, Head of Communications for the Cockcroft Institute and Head of Physics at the University of Liverpool, says: “In the very first Star Wars film, released more than 40 years ago, Luke Skywalker used proton torpedoes to destroy the Death Star as lasers wouldn’t penetrate the shields.

“Fast forward to 2019 and we are now using ‘proton torpedoes’ in cancer therapy. 40 years on, science fact has caught up with science fiction and we are using proton beams to target something hidden deep inside the body, which is very difficult to destroy.

“Similarly, two of the most iconic characters in the films, R2-D2 and CP30, are droids. Now we live in a world where AI-enabled machines and robots, home voice recognition devices and driverless cars are a reality.”

Expanding on how current projects, which scientists around the world are working on, are as mind-blowing as some of Star Wars’ original concepts, Professor Welsch continues: “Although Star Wars’ lightsabres wouldn’t be possible according to the laws of physics, there are many exciting applications that are already real, such as laser knives for high precision surgery controlled by robot arms and adaptive manufacturing using lasers for creating complex structures in metals.

“We also use lasers to realise extremely high electric fields and build particle accelerators that are up to 1,000 times smaller than current technology. This has huge potential to enable entirely new fundamental research and applications that benefit society."

Antimatter is used in Jedi interceptor hyperdrive rings to provide the starship with enough density to remain in hyperspace, as the interceptor is not large enough to retain supralight speeds without external aid. A new facility based at CERN, the Extra Low Energy Antiproton ring (ELENA) is the first and only facility in the world to store and deliver cooled antiproton beams at low energy. Researchers from the Cockcroft Institute are taking a closer look at these mysterious particles to try and understand why it is that all matter in the universe created after the Big Bang is not accompanied by an equal amount of antimatter, or particles with an opposite charge.

Professor Welsch explains: “Our detectors provide us with a much better insight into low energy antimatter beams, so that we are able to understand and control them better and carry out experiments which would have previously been impossible. Such experiments have the potential to rewrite our assumptions about nature and the properties of space and time, making it one of the most exciting fields of research out there.

“Usually we study how to accelerate sub-microscopic particles, but it is definitely an interesting question whether antimatter or high power lasers could be used for spacecraft propulsion. Who knows? If we can find ways how to create and store large amounts of antimatter, then entirely new applications could become possible!”

About the Cockcroft Institute: www.cockcroft.ac.uk

The Cockcroft Institute is an international centre of excellence for accelerator science and technology based at the Daresbury Laboratory, UK.

It is a joint venture between the Universities of Lancaster, Liverpool, Manchester and Strathclyde and the Science and Technology Facilities Council (STFC).

Prof Carsten P Welsch is Head of Physics at Liverpool University and Head of the Liverpool Accelerator Physics Group at the Cockcroft Institute in Daresbury. He has devised a highly successful concept for training networks and has been leading several pan-European programmes. His research focuses on beam diagnostics and the design of particle accelerators.

About the Physics Department at Liverpool University

Researchers at the Physics Department at Liverpool University lead world-class R&D programmes in fundamental science in particular in accelerator physics, condensed matter physics, nuclear physics and particle physics. They are also known internationally for work in applied fields such as semiconductor sensors, nuclear and renewable energy.

Accelerator scientists are collaborating with leading institutes and laboratories around the world, including CERN in Geneva, Diamond Light Source and Daresbury Laboratory in the UK, ESRF and GANIL in France, GSI and DESY in Germany, and TRIUMF in Canada.