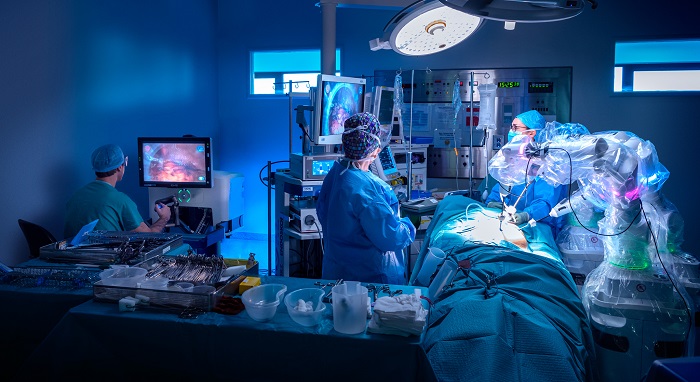 CMR Surgical Ltd today announced the UK launch of its next-generation surgical robotic system, Versius®, which has been used to successfully perform minimal access surgery (MAS) on patients within the NHS.

The first NHS hospital to use Versius was The Western General Hospital in Edinburgh (one of four hospitals in the NHS Lothian Health Board), followed by Milton Keynes University Hospital NHS Trust in Buckinghamshire. Versius has initially been used to perform a range of colorectal surgeries, helping to treat patients with serious bowel disease or bowel cancer.

Dr Tracey Gillies, Medical Director, NHS Lothian, said: “We are delighted to be creating history and to be at the very forefront of medical science. Our team at the Western General Hospital are the first in Europe and among only a handful in the world to pioneer this new type of robotic surgery. This is a really exciting development and is a credit to the team, who are determined to push boundaries to provide the best patient care possible.”

Western General Hospital and Milton Keynes University Hospital NHS Trust are the first to use Versius in Europe; however, further NHS hospitals are scheduled to introduce the system in 2020. These include both large teaching hospitals and smaller local centres and could open the door to a much wider use of robotic MAS than seen to date. Versius supports this by being portable, allowing it to be easily moved to different sites within a hospital, or even transported between hospitals within an NHS trust. Once in theatre, it can take, on average, 15 minutes to set up the system.[iii] Across its first two NHS sites, Versius has the potential to perform up to 700 MAS procedures each year, which otherwise may have been performed by open surgery. The system’s ability to be used frequently should make it cost-effective. It can be purchased through a Managed Service Agreement, which provides budget certainty through a fixed cost. This means Versius has the potential to be used in NHS hospitals that may historically have found the upfront costs of surgical robotics to be prohibitive.

“Innovative robotic systems like Versius are set to play a vital part in delivering world-leading surgical care across the NHS and I am delighted that the team at Milton Keynes will be some of the first in the world to be routinely using this technology,” said Professor Joe Harrison, Chief Executive at Milton Keynes University Hospital NHS Foundation Trust. “Versius represents a remarkable step forward in this field and one that could help make keyhole surgery far more accessible. The hope for us is that this will lead to better outcomes for patients as well as helping us to free up bed space that can then be used to help others in need.”

Lord Prior, NHS England chair, said: “It’s fantastic that the NHS is the first in Europe to use the next generation of surgical robots, and yet another example of how the NHS is teaming up with Britain’s excellent engineering sector to deliver world class care.”

MAS – also referred to as keyhole or laparoscopic surgery – is associated with a number of potential benefits compared to open surgery, including the ability to reduce rates of surgical site infections, pain and scarring.[i],[iv] It is estimated that only one-third of procedures that could be performed laparoscopically in the UK are. Across Europe currently only 13% of hysterectomy procedures are conducted laparoscopically. In addition, 800,000 cases of surgical site infection across all surgical procedures  have been recorded, costing health systems millions.[v] MAS is also linked to faster recovery in hospital, with fewer post-operative bed days required for recovery.[i] A 2018 report by the Office of Health Economics found that a shift to MAS led to a reduction in the average length of stays for gynaecology patients from 5.5 days to just 1.5 days in 95% of cases.[vi]

“Today is another pivotal milestone for Versius as it continues to demonstrate unprecedented value to patients, surgeons and the NHS,” commented Mark Slack, Chief Medical Officer at CMR Surgical. “We set out to design a system that was versatile, portable and cost-effective, and it is immensely rewarding to see it now being used in the NHS – one of the most thorough and clinically rigorous health systems in the world. We are intent on ensuring the responsible introduction of this technology, and the skilled expertise and focus on innovative research at these NHS sites make them the ideal place for this technology. Our focus now will be on working with the surgical community across the UK to provide the option of minimal access surgery to everyone who may benefit.”

Versius has been carefully designed to enhance how surgeons perform MAS procedures including for major gynaecological and colorectal surgery. Three independent arms, which replicate those of a human in size and shape, are coupled with 3D visualisation and unique instrument controls that allow the surgeon to mimic their own human movement, enabling precise surgeries while also making long procedures less strenuous. As part of the introduction of Versius, a clinical registry has been established to provide a database of patient outcomes information to support patient safety, as well as technical data that can support assisted learning and help optimise Versius’ use in the future.

CMR Surgical is a global company headquartered in the UK that works alongside surgeons and hospitals across the world to make MAS a reality for more patients who may benefit.

*Estimates are based on CMR modelling using 2017/18 NHSE data from selected general surgery; urology; gynae and head and neck procedures.