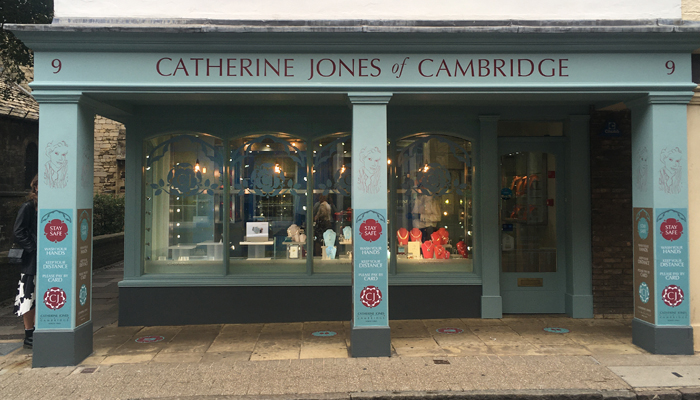 New look Catherine Jones of Cambridge is open for business, after over 100 days of lockdown!

Over the past few weeks I have been working with Vanessa Birkitt designing new branding elements that add a 'bit of Cambridge' for her shop, Catherine Jones of Cambridge jewellers on Bridge Street.

Vanessa had been on a trip to Venice and was taken by the style of architecture there, and thought that bringing an element of Cambridge architecture might be a nice idea for her shop.

Cambridge is of course plentiful in architectural splendour, but after some research, one thing I found that sets it apart is the use of the Tudor Rose. The design of the new 'Catherine' Tudor Rose is a little more modern, and can be used on its own, or with leaves, or include a stylised arch element. I was also keen to impart more of 'Cambridge', because Cambridge isn’t just King's College, punting, or bikes, it’s about invention and innovation.

So, I also came up with a DNA ’vine’, using the Tudor Rose as a space to highlight some elements of Cambridge, an apple and tree for Newton, a code-breaking machine, a Finch for Darwin… This is used on a wall graphic in the shop, and Vanessa is planning some postcards and a little history of Cambridge and Catherine booklet.

We made some small changes too – ‘blued’ up the Cambridge blue colour, also tweaked the logo a little, adding a stylised leaf, equalising the line widths, and adding ‘Since 1963’.

The outside of the shop was freshly painted, and the styled Tudor Rose was used on the windows; graphics were put onto the pillars outside the shop, and social distancing floor stickers were designed. The floor stickers had tickled Vanessa, as I'd designed both ladies and men's 'footprints'.

The shop reopened on 4th July, which apart from being significant as American Independence Day, was the day other independent shops opened in Cambridge (Scruffs, Cambridge Wine Merchants, Varsity Hotel...) and was also her parents' wedding anniversary! 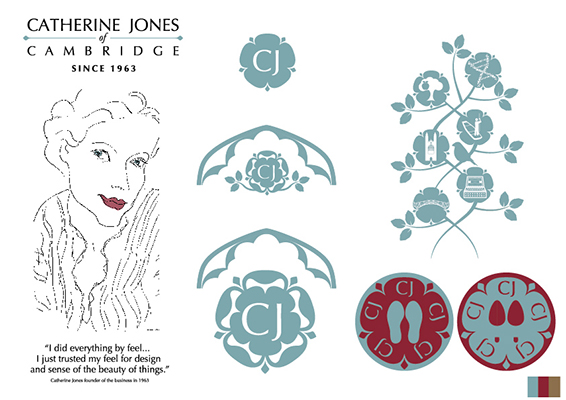