The curious genome of the tuatara, an ancient reptile in peril 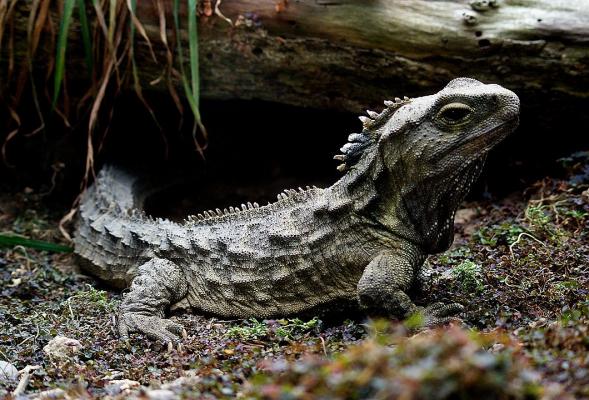 Researchers have sequenced the genome of the tuatara, revealing its unique evolutionary history.

A global team of researchers has partnered up with the Māori tribe Ngātiwai to sequence the genome of the tuatara, a rare reptile endemic to New Zealand. Their work, published in the scientific journal Nature, lays the foundation for understanding the evolution of this ancient species, and can inform conservation efforts to protect it. The study included collaborators at the University of Otago and at EMBL’s European Bioinformatics Institute (EMBL-EBI).

With its small, scaly body, pointy tail, and clawed feet, the tuatara seems to tick all the boxes to be a lizard – yet it isn’t. This ancient reptile is the sole survivor of its own evolutionary branch on the tree of life, the Sphenodontia. Until now, biologists had not reached consensus on the evolutionary history of tuatara – whether they are more closely related to birds, crocodiles, and turtles, or if they stemmed from an ancestor shared with lizards and snakes.

“Our research confirms that tuatara have diverged from the ancestor of lizards and snakes about 250 million years ago,” says Matthieu Muffato, the analysis lead from Ensembl comparative genomics at EMBL-EBI. “This long period of independent evolution explains why we found the tuatara genome to be so unlike those of other vertebrates.”

“The tuatara genome is considerably bigger than the human genome, and it has a unique constitution. It contains a lot of repetitive DNA segments that are unique to the species and have no known function,” explains Fergal Martin, Vertebrate Annotation Coordinator at EMBL-EBI.

The sequence of the tuatara genome revealed a number of aspects of this reptile’s lifestyle. Although tuatara are predominantly nocturnal animals, their DNA carries a high number of genes involved in colour vision, which might help day-active juveniles escape from their predators.

If they survive the vagaries of their juvenile life, tuatara can live to be more than 100 years old. Scientists examining some of the genes implicated in protecting the body from ageing have found that tuatara have more of these genes than any other vertebrate species yet examined.

“Could this be one of the keys to their long lifespan? Tuatara also don’t appear to get many diseases, so looking into what genetic factors might protect them from infection was another point of focus for our study,” says Neil Gemmell, Professor and Team Leader at the University of Otago.

“The tuatara is an iconic species, both for the Māori and for biologists. It has a unique biology and its basic body shape hasn't changed much over evolutionary time, so it’s a precious species for us to understand what the common ancestor of lizards, snakes, and tuatara was like,” explains Paul Flicek, Associate Director of EMBL-EBI Services.

The scientists hope that their findings on the genome and biology of the tuatara will inform conservation efforts to protect this unusual reptile. Tuatara used to thrive in New Zealand before the first human settlers brought invasive predators such as rats 800 years ago. The tuatara’s extremely slow life cycle is no match for the voracity of its predators: when it comes to reproduction, tuatara take the scenic route. They sometimes need more than 10 years to reach sexual maturity, and they produce young only every two to five years. Although the species’ conservation status is of “least concern” according to the IUCN Red List of Threatened Species, the tuatara relies on active conservation management to prevent the establishment of invasive species on the islands where it survives.

“Very early on it became clear that a primary goal for us all was to develop new knowledge that would improve the conservation of this species. We agreed to partner together with Ngātiwai to achieve that aim, whilst also looking for opportunities to share other benefits that might derive from the research. It was an informed partnership that I believe was an important enabling element for the project’s success, which extends well beyond the scientific achievement of sequencing the genome,” says Gemmell.

This work was co-funded by the Wellcome Trust.