New Centre for Cities’ research in partnership with HSBC UK reveals that Britain’s jobs crisis is bigger than realised, as the economy will need to create almost ten million new private sector jobs just to reverse the damage done by the pandemic.

If this pattern repeats post-Covid then 9.4 million new private sector jobs will be needed to get the 1.3 million people who lost their jobs during the pandemic working again.

After the financial crisis, big cities created the vast majority of new jobs and are expected to do so again post-Covid. London created one in four of all new private sector jobs (790,300) – equal to 17 Scarboroughs, or 25 Hartlepools. Other big cities also played an outsized role: in Manchester, 152,100 new jobs were created; in Birmingham the number wasn 99,100; and in Glasgow 40,800.

In total, Britain’s ten largest cities created almost half (45.6%) of jobs during the ‘jobs miracle’, despite accounting for just 3.5% of land. In contrast, smaller towns and rural areas created 36% of new jobs. These findings underline the important role that big cities will play in helping the country recover from Covid-19.

Contribution of cities and non-urban areas to job creation, 2013-19 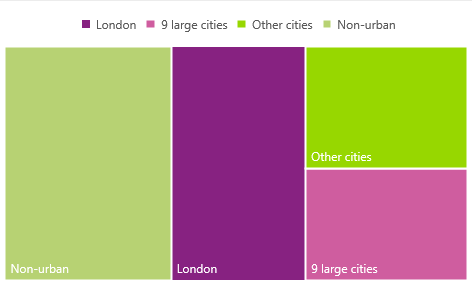 Many of the jobs lost in the pandemic were in sectors such as hospitality and tourism. While they are expected to recover quickly once the economy reopens, with an estimated three quarters of new jobs likely to come from sectors such as these, relying on them for new jobs will not address years of poor productivity and pay stagnation, particularly outside London and the Greater South East. After the pandemic, the productivity problem that UK cities face will need to be addressed.

To do this the Government should invest in adult education to train people for higher-paid jobs in emerging industries. It should also recognise the crucial role that cities will play in building back better from the pandemic. It should invest £5 billion in a new City Centre Productivity Fund to make struggling city centres more attractive places for high-skilled businesses to locate.

The paper’s other proposals to help the country build back better from the pandemic include reforming business rates, which in their current form are a tax on business investment, and devolving more economic powers and resources to local government – particularly England’s metro mayors.

Centre for Cities’ Chief Executive Andrew Carter said: “Britain’s biggest cities will play a central role in our recovery from the pandemic, as they did after the last economic crisis when London alone created a quarter of all new jobs.

“We must use Covid-19 as an economic reset and address many of the long-standing problems that the economy has faced in recent years such as stalled productivity and stagnant pay. To do this the Government will need to focus on investing in adult education to train people for higher paid jobs.

“Addressing these problems will be be essential if the Government hopes to attract higher-skilled businesses in emerging industries to cities and large towns in the North and Midlands and meet its levelling up objectives."

Ian Stuart, CEO, HSBC UK said: “The employment challenge ahead for the country’s economy cannot be underestimated. Beyond the sheer volume of new jobs required, the UK will need to create high value, export-led employment across all regions, if it is to address the age-old productivity puzzle. Coming out of the Covid-19 pandemic, we will only truly succeed in levelling up the country if the challenge is shared between government and the private sector with a focus on reskilling our people and attracting new business growth and international investment in the sectors where we have a real competitive advantage.”

This study includes data from the largest cities and towns in Great Britain; comparable data for Northern Ireland was not available.

About Centre for Cities

Centre for Cities is a research and policy institute, dedicated to improving the economic success of UK cities. We are a charity that works with cities, business and Whitehall to develop and implement policy that supports the performance of urban economies. We do this through impartial research and knowledge exchange.

As one of the world’s largest banks, HSBC supports over 1 million businesses in the UK and more than 37 million customers worldwide. This year, we won ‘Best Business Banking Provider’ at the British Bank Awards 2018.

We are committed to working with UK SMEs to help them realise their ambitions and over the past three years have committed £34bn in lending to enterprises in this sector.

Our international network gives us access to around 90% of world trade flows, so we are uniquely positioned to support the ambitions of internationally-minded businesses.

We aim to partner with businesses, rather than just provide products. To that end, we offer guidance through a range of channels, including our regional Strategies for Growth events, our HSBC Knowledge Centre and our Financial Wellbeing programme.