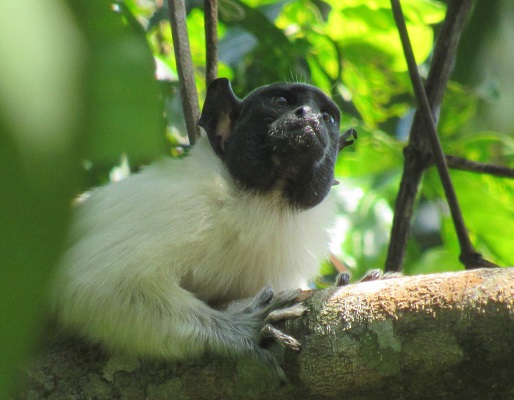 Published in the journal Behavioral Ecology and Sociobiology, the study is the first to show asymmetric call convergence in primates, meaning that one species chooses to adopt another species’ call patterns to communicate.

Pied tamarins are critically endangered and have one of the smallest ranges of any primate in the world, much of it around the city of Manaus, while red-handed tamarins are found throughout the north-eastern Amazon region.

Red-handed tamarins have greater vocal flexibility and use calls more often than pied tamarins, and the scientists believe they might alter their calls to avoid territorial disputes over resources.

Lead author Tainara Sobroza, of the Instituto Nacional de Pesquisas da Amazonia, said: “When groups of tamarins are moving quickly around mature Amazonian forest it can sometimes be difficult to tell the species apart, but during our research we were surprised to discover they also sound the same in the areas of the forest they cohabit.

“We found that only the red-handed tamarins change their calls to those of the pied tamarins, and this only happens in places where they occur together. Why their calls converge in this way is not certain, but it is possibly to help with identification when defending territory or competing over resources.”

Co-author Dr Jacob Dunn, Associate Professor in Evolutionary Biology at Anglia Ruskin University (ARU), said: “We have long known that when closely related species overlap in their geographic ranges, we are likely to see interesting evolutionary patterns. One famous example is the Galapagos finches, studied by Darwin, whose beaks evolved to specialise on different foods on the islands to avoid competition.

“In some cases, rather than diverging to become more different from one another, some closely related species converge to show similar traits. Our study is the first to show asymmetric call convergence in primates, with one species’ call becoming the ‘lingua franca’ in shared territories.

“Because these tamarin species rely on similar resources, changing their ‘accents’ in this way is likely to help these tiny primates identify one another more easily in dense forest and potentially avoid conflict.”