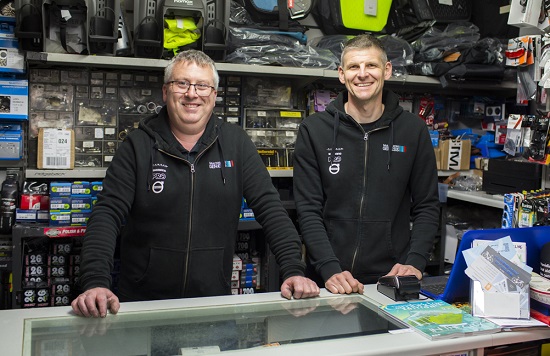 With the help of Indie Cambridge - the community of ‘real’ Cambridge - Cambridge Network continues its exploration of the best independent businesses, people, shops, cafés, restaurants, venues and events in Cambridge and the surrounding area. This week: Kingsway Cycles.

One of the many great things about the indie scene is discovering a ‘hidden gem’ tucked away in one of Cambridge’s numerous side streets. One such gem is Kingsway Cycles – centrally located on the corner of City Road and the wonderfully named Paradise Street, that runs parallel to Burleigh Street near the Grafton Centre.

This family-owned, proudly independent business has been part of the local scene since 1978, when David Ouzman first set up shop. Originally catering mainly for motorbike owners (they still do MOTs for mopeds), the shop is now run by David’s son Steve and close friend Nick Barrett, both of whom have cycling in their hearts.

Alongside its range of new bikes for sale including touring, mountain, racing, leisure, folding and electric cycles, Kingsway stocks a solid range of second-hand bikes, clothing and accessories. It’s possible to hire bikes – complete with lights and locks, and the shop is also part of the Cycle to Work Scheme which enables employee to pay for a bike over the course of a year with hire payments deducted from their gross monthly salary.

With traditional independent values and a down to earth approach, Nick and Steve offer a fantastic repair service too. They open early at 8pm so bikes can be dropped off before work or after the school run, and their aim is for a same-day turnaround to ensure the cycling community of Cambridge keeps on the move.

Run by long-term residents with a true passion for Cambridge and the independent scene, Indie Cambridge is the only organisation and website dedicated solely to supporting and promoting indie businesses in the city – and beyond. Their site features hundreds of traders and tradespeople, artists and makers, producers, venues and events – all of which play a part in the real life of the city and local area. Packed with valuable insider knowledge, it also features a list of indie businesses offering online shopping, click and collect and local delivery.

Read the latest issue of The Indie magazine or click here for places where you can pick up a free copy. Alternatively, have it delivered direct to your door by joining IndieClub - just £12 for three issues a year, then sit back, relax and enjoy a most civilised read.

A celebration of the city’s best independent traders, venues and events