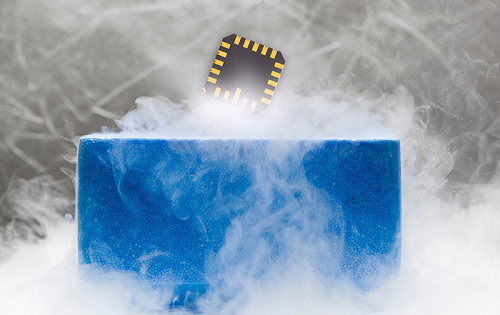 Paragraf introduces the GHS-C Graphene Hall Sensor (GHS), providing the industry’s only viable approach to measuring magnetic field strengths of 7 Tesla (T) and above, at temperature extremes below 3 Kelvin (K).

Paragraf has entered volume production of the GHS-C, a Graphene based Hall sensor optimised to provide high field measurements while operating at cryogenic temperatures. It achieves this while dissipating virtually no heat.

The GHS-C is the only Hall sensor now in volume production that can offer this level of performance at temperatures below 3 K. The underlying technology is capable of operating at temperatures even lower, with no loss of performance. This is made possible by the lack of any planar Hall effect in graphene, a unique feature that Paragraf has harnessed.

This is the latest example of Paragraf’s capabilities and builds on previous product developments. The GHS-C uses graphene optimised and tuned for high field applications, including super-conduction, quantum computing, high-energy physics, low-temperature physics, fusion and space. In addition, as the next generation of particle accelerators rely on magnets that generate field strengths more than 16 T, the GHS-C is already drawing interest from leaders in this field.

“When looking for high sensitivity, one of the biggest challenges that researchers and engineers working at very low temperatures face is the instability caused by the heat dissipated by conventional sensors,” commented Ellie Galanis, Product Owner at Paragraf. “This is particularly relevant when working in cryogenic applications, such as quantum computing. Our GHS-C dissipates nW of heat rather than mWs. This has a much smaller impact on the apparatus, allowing researchers to make accurate and repeatable measurements.”

The GHS-C is now in volume production and is being supplied in the industry-standard LCC 20 package, making it a drop-in replacement for existing Hall sensors, continuing our work in supporting cryogenic equipment manufacturers and quantum computing research worldwide.

Spun out of the Materials Science Department, University of Cambridge, Paragraf has one core focus… to deliver the speculated capabilities of graphene to the real world.