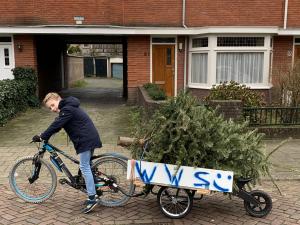 A Dutch boy and his family is using 10to8's online scheduling software to collect Christmas trees and raise money for children's cancer.

Walter is a highly gifted 10-year-old boy from the Netherlands who’s been looking for something to do during his vacation.

But it all started when Walter was eight. He was inspired by his father who’s an entrepreneur and has always been supportive of creative ideas that move our society forward. To earn some pocket money and do something useful during the Christmas break, Walter started collecting old Christmas trees from his neighbors.

It was a great success for the 8-year-old. But it created a logistical nightmare for the family: they got bombarded with SMS, emails, and other messages asking Walter to pick up trees from all around town.

The next year Walter was even more driven. One of his classmates had been diagnosed with cancer and he wanted to do whatever he could to help his friend. So in 2019, Walter increased the target from 80 to 100 trees and set the goal to raise at least €200 for KiKa - a Dutch children's cancer research foundation.

The budding entrepreneurs’ father, Rogier, turned to the 10to8 online booking system to help them schedule and organise their tree pickups. It let the family sort out not just pickups but also dealt with the ever-increasing request volume and incoming messages - they actually enjoyed it!

10to8 is a powerful appointment scheduling software used by over 100,000 businesses worldwide including healthcare organizations, private practitioners, universities, salons, and more.
We're a diverse, remote-working team of 25, scaling rapidly.

10to8 Ltd
10to8 Ltd directory information
Back to Search