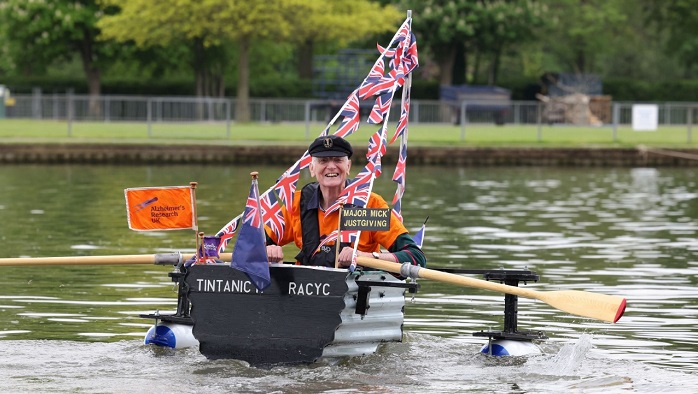 After his hugely successful adventure with Tintanic – a homemade boat made of tin – in the first lockdown last year, retired Scots Dragoon Guards Major Michael Stanley, better known as Major Mick, has taken his new and “improved” Tintanic II on the road for a tour of waterways around the UK.

This time raising money for Alzheimer’s Research UK, the UK’s leading dementia research charity, he arrives at the City of Cambridge Rowing Club on Wednesday 21 July.

The 80-year-old Major and his first boat have been making waves sailing in Henley, where he was joined by well-known adventurer and broadcaster Ben Fogle, Beaulieu in the New Forest, the Pirate’s Castle at Regent’s Canal in London, Manchester and most recently in Cardiff and Bristol.

Major Mick was inspired to take on this new challenge after seeing the devastating effect of this terrible condition on his friends and family.

He aims to raise £20,000 for Alzheimer’s Research UK, which powers world-class studies focusing on prevention, diagnosis and treatments for dementia. There are almost 1 million people currently living with dementia in the UK.

Mick said: “I am impressed by the dedication and enthusiasm of the staff at Alzheimer’s Research UK who work tirelessly to raise money to support crucial research in our universities, hospitals and research laboratories. 2020 showed us the importance of the incredible work that UK scientists, doctors and researchers are capable of, and with your support we can make a difference, to find a cure for this distressing condition and the diseases that cause it."

Ian Wilson, Deputy CEO and Executive Director of Fundraising and Communications at Alzheimer’s Research UK said: “Our vital research is only made possible thanks to our incredible supporters, and we’re so grateful to Major Mick for supporting Alzheimer’s Research UK. Dementia affects a significant proportion of the population – one in three people over 65 in the UK will die with some form of the condition. Fantastic fundraising efforts like this will help us to make life-changing research breakthroughs for people with dementia.”

To sponsor Major Mick visit www.justgiving.com/fundraising/majormick-tintanic. For further information about Alzheimer’s Research UK, or to find out more about fundraising for the charity, call 0300 111 5555 or visit www.alzheimersresearchuk.org