Bango launches 'The Worst Ad Campaign in the World' 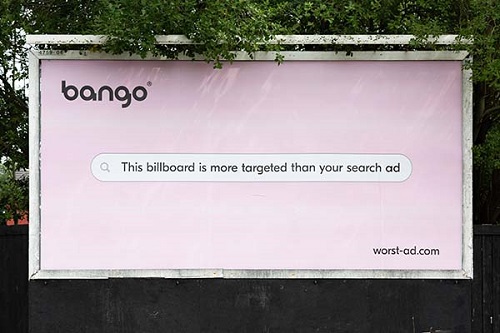 The data, which comes from experiments with over 65,000 search ad impressions, found that a third of search ads never reach the promised audience. For those that do, more than a quarter still fail to reach those with purchase intent, while a further 20% fail to reach key decision makers.

Instead, Bango found that supposedly targeted search ads appear in front of a baffling array of audiences. In the case of one campaign, an ad targeting senior marketing professionals appeared in front of students, doctors, lawyers, supermarket cashiers and a dog breeder.

With $172 billion spent on search advertising last year alone, Bango’s findings suggest that over $60 billion a year could be being wasted on search ads that never reach their target audiences.

In an effort to raise awareness of this poor targeting, Bango has launched a new campaign titled “The Worst Ad Campaign in the World”. To kick off the campaign, Bango has acquired ad space on the least viewed billboard in the UK, with the CMO claiming that it’s “still a better use of budget than many search ads.”

The billboard, which is located near Manchester, has lower passing traffic than any other UK billboard*.

Speaking at the stunt, Anil Malhotra, CMO at Bango justified the decision: “Search targeting is broken. To me, buying a search ad nowadays is about as useful as putting up a billboard in the middle of nowhere. A huge percentage of the target audience never sees it, and of those who do, the likelihood that they will act on it is slim to none.

“For all the talk of big data and advanced targeting, the truth is that most search engines aren’t delivering as promised. Despite this fact, marketers and brands continue to pump billions of dollars into a system that’s fundamentally flawed. We all expect to lose audiences down the funnel, but to lose a third of them before a campaign’s even got off the ground — that’s not acceptable.”

To address this issue, Bango is arguing for a new way of targeting called ‘Purchase Behaviour Targeting’ (PBT). By calling on payments data from around the web, Purchase Behavior Targeting allows marketers to target audiences based on what they’ve previously bought.  As Anil explains:

“Bango is a payments company at heart, focused on helping people pay for the things they want to buy. It’s not enough to guess what people will be interested in buying based on what they ‘like’ or search for online. As our research shows, that fails far too frequently. Purchase Behaviour Targeting fills the gaping holes in on-line targeting by focusing on buyers, not browsers.”

For more on Bango’s Worst Ad Campaign or to view an interactive summary of Bango’s research visit worst-ad.com

To find out more about Purchase Behaviour Targeting visit bango.ai

*Compared to any other billboard listed in the ClearChannel database. Billboard passing traffic is based on estimated data from ClearChannel sourced in 2021.