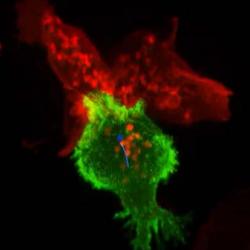 Cambridge researchers have discovered how T cells – an important component of our immune system – are able keep on killing as they hunt down and kill cancer cells, repeatedly reloading their toxic weapons.

Cytotoxic T cells are specialist white blood cells that are trained by our immune system to recognise and eliminate threats – including tumour cells and cells infected with invading viruses, such as SARS-CoV-2, which causes COVID-19. They are also at the heart of new immunotherapies that promise to transform cancer treatment.

Professor Gillian Griffiths from the Cambridge Institute for Medical Research, who led the research, said: “T cells are trained assassins that are sent on their deadly missions by the immune system. There are billions of them in our blood, each engaged in a ferocious and unrelenting battle to keep us healthy.

“Once a T cell has found its target, it binds to it and releases its toxic cargo. But what is particularly remarkable is that they are then able to go on to kill and kill again. Only now, thanks to state-of-the-art technologies, have we been able to find out how they reload their weapons.”

In a study published in Science, the team has shown that the refuelling of T cells’ toxic weapons is regulated by mitochondria. Mitochondria are often referred to as a cell’s batteries as they provide the energy that power their function. However, in this case the mitochondria use an entirely different mechanism to ensure the killer T cells have sufficient ‘ammunition’ to destroy their targets.

Watch a video and read the full story