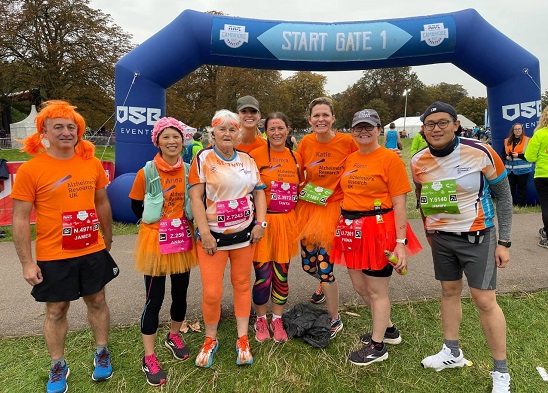 Alzheimer’s Research UK has been announced as the new headline charity partner for the TTP Cambridge Half Marathon.

The UK’s leading dementia research charity, which is based at Granta Park in Great Abington, has been a national charity partner for the 13.1-mile race since 2019 and has now stepped up to be headline partner for the 2022 event, which is provisionally scheduled for Sunday 6 March.

The charity had around 160 runners in the race on Sunday. They also had 45 volunteers, which included 22 members of staff, at five cheer points around the course cheering on the runners.

Among the Alzheimer’s Research UK runners on Sunday was Sue Strachan, from Herefordshire, who was diagnosed with vascular dementia in 2014.

The 65-year-old, who ran the London Marathon in 2018, said: “After running a half marathon early last year I said I would never run another, but I decided to run the Cambridge race this year specifically because it is the local event for the charity.

“The charity has been such a wonderful support to me and supporting them has given my life real purpose. Fundraising and volunteering for Alzheimer’s Research UK helps me to stay positive and has been so good for my wellbeing.

“It was an amazing day on Sunday, meeting up with the other Alzheimer’s Research UK runners before the race, getting to see the historic city of Cambridge and enjoying the atmosphere on the course, particularly the charity’s amazing cheer squads.

“Most importantly, the money I and all of the brilliant Alzheimer’s Research UK runners have raised provides hope that breakthroughs will soon be made to bring about life-changing treatments for dementia.”

Kelly Holliday, Sporting Events Manager at Alzheimer’s Research UK, said: “As a Cambridgeshire-based national charity we are delighted to be the new headline charity partner for the TTP Cambridge Half Marathon.

“It is a hugely popular race with our supporters and one of the top races in our portfolio of events. Because it is our local race, many of our staff attend to cheer on the runners, ensuring our cheer squads are the biggest and loudest on the course.

“We look forward to having even more runners representing #TeamARUK and proudly wearing our orange tops at the 2022 race.

“The vital funds raised by our runners will help us power world-class studies to make life-changing breakthroughs for people with dementia.

“There are nearly 1 million people throughout the UK living with dementia. In the UK today, there are no treatments to stop or slow the diseases that cause dementia, but thanks to our amazing supporters, our researchers are working hard to change that.”

“We are looking forward to working with Alzheimer’s Research UK to raise vital funds dedicated to researching causes, diagnosis, prevention, treatments and ultimately a cure for the diseases that cause dementia.”

For more information about the Cambridge Half Marathon go to https://cambridgehalfmarathon.com