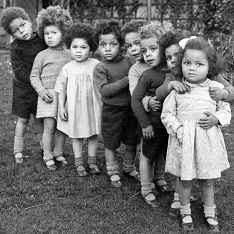 An exhibition based on the work of Professor Lucy Bland of Anglia Ruskin University (ARU) has won a prestigious national Museums Association award.

It was shortlisted for the award alongside the V&A Dundee and the Jewish Museum London, and the winner was announced by Dame Caroline Mason, Chief Executive of the Esmée Fairbairn Foundation and one of the award judges.

The online “Brown Babies” exhibition is hosted and organised by The Mixed Museum, which focuses on the history of racial mixing in the UK.  The exhibition is sponsored by Anglia Ruskin University (ARU) and builds on the research Professor Bland carried out for her book Britain’s ‘Brown Babies’, which earlier this year won the Social History Society’s Book of the Year prize.

Lucy Bland, Professor of Social and Cultural History at Anglia Ruskin University (ARU), said: “Winning two prizes for my research is something I never dreamed of and still cannot quite believe.  I am immensely grateful to Chamion Caballero of The Mixed Museum for being so enthusiastic about my research and enabling its digitisation, and to ARU for supporting this online project. And most importantly, a huge thank you to all the participants without whom there would be no book or exhibition.”

For her book, Professor Bland interviewed over 50 people who were born in Britain to Black GI fathers and white mothers between 1942-45.  Dubbed the “brown babies” by the African American media, it is estimated that almost half of these 2,000 children were placed in children’s homes in the UK.

The online exhibition – which includes contributions from people who have come forward since the book was originally published – expands on these stories through photographs, newspaper reports, and audio, to bring this important chapter of Britain’s 20th century history to an even wider audience.

Dr Chamion Caballero, Director of The Mixed Museum, said: “This is such an amazing outcome.  It was an honour for us even to be shortlisted alongside such amazing organisations but to win is just incredible.  As a small and still very much evolving digital museum, to have the ‘Brown Babies’ exhibition acknowledged by the Museums Association through this award is such tremendous encouragement that the work we are doing is being seen and valued.

“As part of our work to share and preserve the histories of racial mixing in Britain, we believe in the importance of centring the voices of ordinary people, particularly those whose accounts have tended to be overlooked.  And so we were honoured to be able to work with Lucy Bland and Anglia Ruskin University to help share the stories Lucy collected as part of her ‘Brown Babies’ research.

“It is thanks to the bravery and generosity of those who shared their experiences growing up mixed race during wartime that our exhibition exists, and this wonderful accolade belongs first and foremost to all of them.  We hope it will go some way to help everyone who contributed to the research and the exhibition to feel that, after so many decades being marginalised, their history is increasingly seen as significant, valuable and worthy of attention.”

The digital exhibition can be viewed here