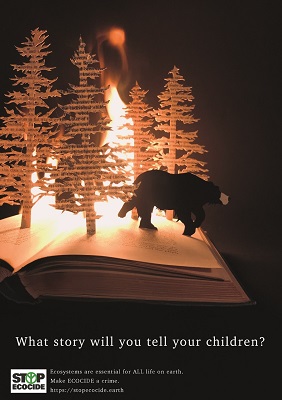 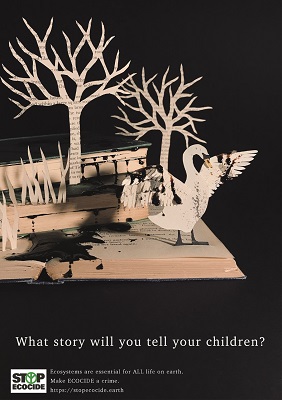 Tabitha Wall, who graduated last month from Anglia Ruskin University (ARU) in Cambridge after completing the BA (Hons) Illustration degree course, was one of two ARU winners at the recent World Illustration Awards 2021 organised by the Association of Illustrators, the professional body for illustration in the UK.

Letchworth-based Tabitha, who has now secured a full-time job in the art department of a London film and advertising company, was inspired by the work of Stop Ecocide when she set out designing her series of sustainability posters (examples above and right), and was delighted that the environmental group gave her permission to enter the work in the World Illustration Awards 2021.

Tabitha explained: “These posters came from a brief set on my Illustration degree. I stumbled across the work of the organisation Stop Ecocide at a protest and was really inspired by their work and the solutions-based approach they had to the climate crisis. Their campaign focuses on protecting ecosystems using international law, which I felt offered real hope.

“For my posters, I focused on the emotive relationship between storytelling and the parental desire to protect.  The final pieces were all destroyed at the final stage of the production process to represent the destruction of each ecosystem.  For the melting ice image, I froze the book and then broke up the ice with a hammer. The oil scene involved dribbling the book with molasses.

“As I was using natural materials, once photographed I was able to completely recycle the final pieces, and the physical work is now biodegrading on the compost heap!

“I am absolutely delighted to have received a new talent WIA category award.  It means so much to me as a recent graduate and it is such a lovely way to start my career.”