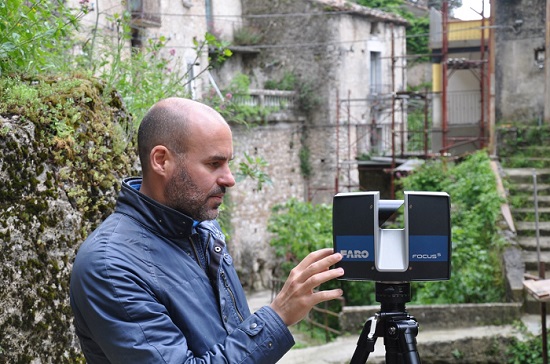 A digital heritage expert at Anglia Ruskin University (ARU) has won a prestigious innovation award for a documentary that tells the story of a town that was left devastated by an earthquake.

Their film, Italia Terremotata, was released on 23 November 2020, 40 years to the day that a magnitude 6.9 earthquake struck the Italian town of Senerchia.

Using a 3D laser scanner and 360-degree panoramas, the researchers were able to create a digital replica of Senerchia’s old town, with accurate interpretations of the surfaces and colours.  In the documentary, they combined this footage with interviews with those affected, songs, poems, and archive material, including photos and newspaper reports.

An online workshop, organised in conjunction with the 40th anniversary of the earthquake, has been instrumental in laying the foundations of what is hoped will be a long-lasting relationship with Senerchia.

The town is in the process of creating a Museum of Resilience and the film and the immersive virtual reality application created for Italia Terremotata will become an integral part of the museum and promote collaborations with other communities impacted by earthquakes.

Dr Galeazzi, a Research Fellow at ARU’s StoryLab, said: “Our film has already been well received by the public, including some of those who were personally affected by the earthquake in 1980, but it is such an honour to receive this award from fellow filmmakers and academics at the BAFTSS.”

The documentary was funded by Anglia Ruskin University (ARU) and Eastern Arc, and an English language version is available to view here.