ARU is recognised for its Armed Forces support 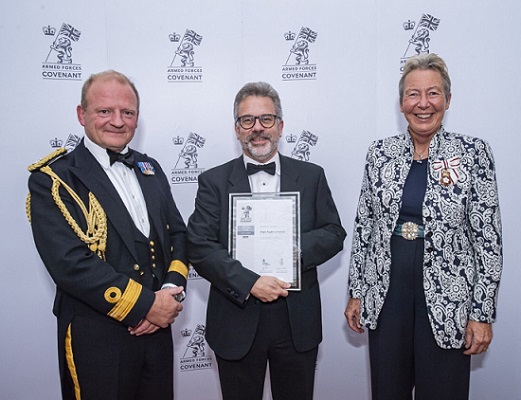 Anglia Ruskin University (ARU) has received an award recognising its positive environment and support towards employees with a background in the Armed Forces.

The award is given to institutions that have signed the Armed Forces Covenant, and display positive policies towards defence people, including reservists. They must also demonstrate commitment to extra leave for reservists for training purposes.

Employers must also demonstrate that service personnel or the Armed Forces community are not unfairly disadvantaged as part of their recruiting and selection processes.

Among the measures taken by ARU to support Armed Forces employees include establishing an Armed Forces Network, supporting reservists, cadet adult volunteers, veterans and their partners, and offering mentoring to assist transition from the military into civilian life.

ARU has several partnerships in place with military charities to better understand the needs of employees, and ARU’s Veterans and Families Institute for Military Social Research is actively engaged in research to improve life for military veterans and their families.

As part of ARU’s collaborative work with the Armed Forces, military training is formally recognised, and the transient military lifestyle of serving personnel is supported, through work-based, distance learning degree programmes, approved by the Ministry of Defence.

Chief Operating Officer James Rolfe, who is also Armed Forces Champion at ARU, said: “We are delighted to receive this award, which is recognition of our long-standing commitment to armed forces personnel and their families, past and present, across the eastern region.

“Our education programmes welcome the Armed Forces personnel at all stages in their career and afterwards, and we have research activity that directly supports the armed forces and their families.

“Similarly, as an employer, we welcome former personnel and their families as part of our workforce, including as reservists.  I look forward to developing further our relationship with the armed forces to address the challenges and opportunities of the future.”