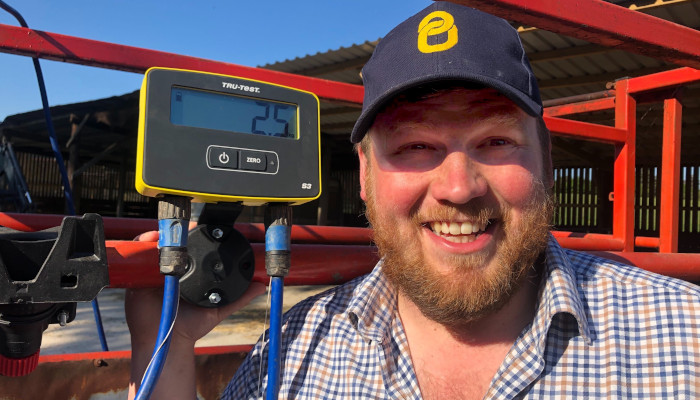 Join the  ‘Weighing Made Easy’ webinar on 3rd June at 1pm for the chance to win an S3 weigh scale worth £395.

Weighing is the key to improved livestock productivity, however sending your herd through the crush can be time-consuming and stressful, with cattle often experiencing a weight dip in the subsequent days. The Breedr app overcomes these issues, reducing weighing time by a third when integrated with Tru-Test weighing system, and providing data about the animal in real-time to enable informed decision-making and actions while the animal is still in the crush.

In a webinar on 3rd June at 13:00 Breed, the free precision livestock app, and Tru-Test, developers of weigh scales, will show how their technology integration helps farmers weigh up to three times faster and make informed real-time decisions while the animal is still at the crush, improving individual animal DLWG and overall profitability. Participants have the opportunity to win a Tru-Test S3 weigh head, worth £395, that integrates directly with Breedr app.

Tom Exwood, a Sussex farmer who has been using Breedr for several months, has already noticed the difference: “It used to take three men a full day to weigh 230 animals, but with the Breedr Tru-Test integration it now takes just two and a half hours.”

Information about health, weight loss or gain is available immediately for each animal via the Breedr app on a phone or tablet, allowing critical decisions and actions to be taken in the crush.

As Breedr Founder Ian Wheal comments: “With many of our farmers we’re seeing that as their cattle get used to regular weight sessions using the faster streamlined system, the post-weighing weight dip becomes far less pronounced. This is great news for everyone and very encouraging when we start to see the productivity leaps that are possible with access to more frequent weight data.”

Better decisions at the crush with real-time animal data

As the animal steps into the crush, the Tru-Test weigh scale looks for a steady weight, which is sent to the Breedr app to be matched to the correct animal either using a visual ID or by scanning its EID ear tag using a Tru-Test stick reader.

As each animal comes through the crush, Breedr’s app displays the average daily live weight gain since their last weigh session, as well as signalling if their performance is increasing or decreasing.

Alison Fergus of Tru-Test comments: “With regular weighing you can ensure animals are gaining weight and quickly distinguish between the good performers that are doing well with less feed and the poor performers who might need medical treatment.”

This information is invaluable when it comes to evaluating the impact of a new regime on a specific group, e.g. weaning or changing diets. Being able to intercept a bad transition early, before the animal’s performance starts going backwards, can mean the difference between a positive and negative margin at the point of sale.

With individual low performers you can view the animal health history in real-time on the app and, if appropriate, give a treatment while they are still in the crush. Logging a medicine against an individual animal or group will instantly appear in the animal’s record, as well as updating the levels in your virtual medicine cabinet, keeping your Vet Med reports up-to-date as you work.

High performers that meet pre-set weight targets can be drafted for sale on the app, with finished cattle able to be marketed direct to national buyers willing to pay a premium for animals with up-to-date weight data.

More information about Breedr can be found at www.breedr.co