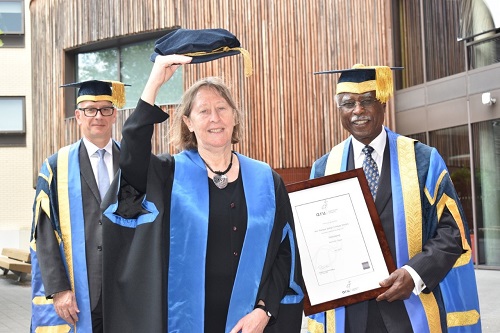 Lynchpin of the Cambridge legal community, Her Honour Judge Lindsay Davies, yesterday (Tuesday) received an Honorary Fellowship from Vice Chancellor of Anglia Ruskin University (ARU), Professor Roderick Watkins, at a ceremony in Cambridge that was attended remotely by students.

Judge Davies studied Law at University College of Wales Aberystwyth, before being called to the Bar in 1975.

She became Head of Fenners Chambers in Cambridge, before becoming an Assistant Recorder in 1998 and a Recorder in 2000. In 2012, she was appointed as a Circuit Judge on the South Eastern Circuit.

She has been a trustee of the Cambridge and Ely Child Contact Centres and is now their Patron.

Professor Watkins said: “As the lynchpin of the local Family Law community and of the wider Cambridge legal community, we are extremely proud and grateful to have had Judge Davies’ endorsement and visible, vocal support for ARU’s Law Clinic.

“Judge Davies has always given her backing to this initiative for the benefits it brings to both students and our local community.”

Since the opening of the Clinic in May 2018, Judge Davies has supported ARU students through training in the County Court, often involving her judicial colleagues.

She has also instigated and supported students with projects such as developing and launching websites aimed at providing the public with help and information about the way the Family Court works. She has encouraged the Support@court initiative which enables students to attend court and support unrepresented parties.

As a key supporter of Resolution – the organisation for family solicitors – Judge Davies has actively encouraged a strong relationship between its professional members and ARU students.

Professor Watkins added: “The University is proud to be associated with Judge Davies, and we hope that through this award, we can show our appreciation and gratitude for the unwavering support Judge Davies has offered the Law Clinic and its students.”