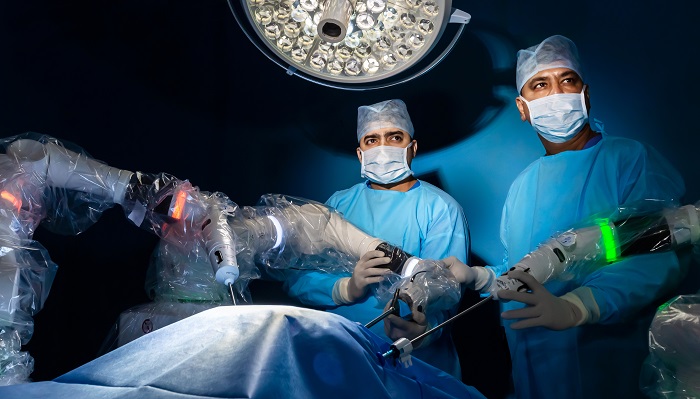 CMR Surgical Ltd today announced that Galaxy Care Hospital in Pune, India, has become the first hospital in the world to procure Versius®, a next-generation surgical robotic system. A range of surgical procedures have already been conducted using Versius® at the world-renowned centre for laparoscopy, including transthoracic, hysterectomies and myomectomies, under the leadership of Dr. Shailesh Puntambekar.

Galaxy Care is a well-established centre of excellence for laparoscopic surgery and the introduction of Versius® will support the hospital to bring robotic-assisted laparoscopic surgery to more people. Dr Shailesh Puntambekar, Consultant Oncologist, Surgeon and Medical Director of Galaxy Care will lead the team using Versius®. He is an international pioneer in surgery and renowned for his advanced laparoscopic skills. In addition to this, he is responsible for training laparoscopy to surgeons from all over the world, helping to bring the benefits of minimal access surgery to patients globally.

Dr Puntambekar has led the way in bringing surgical robotics to India, having performed robotic-assisted surgery in India for over a decade and will be responsible for the introduction of Versius® to Galaxy Care. Versius® as a next-generation surgical robotic system with its small form factor, versatility and portability has been designed to support surgeons to deliver the benefits of minimal access surgery to patients around the world.

“As an experienced surgeon in robotic assisted surgery I think that there is significant potential for Versius® to further increase access to laparoscopic surgery for my patients, so it was a natural choice to acquire this system.Versius®, as a small and cost-effective system, is well suited for meeting the high surgical demand in India. We are excited to bring the next-generation surgical robot to India,” said Dr. Shailesh Puntambekar, Medical Director at Galaxy Care Hospital, Pune, India.

“Galaxy Care has become our first customer to acquire and use Versius® and this is an important milestone in bringing the benefits of minimal access surgery to all. We are pleased to be working with a centre that has some of the best surgeons in the world, meeting a high surgical demand. It is important that we bring Versius® to market responsibly and we are delighted to be working closely with Galaxy Care on the introduction of Versius® in the hospital, said Mark Slack, Chief Medical Officer, CMR Surgical.

The commercial introduction of Versius® also marks the launch of the world’s first clinical registry for a surgical robotic system. The registry is part of CMR Surgical’s commitment to post-market surveillance as part of the IDEAL framework and a responsible introduction of a medical device. The clinical registry managed by CMR Surgical, working in partnership with customers is recording and monitoring the patient outcomes of all procedures conducted using the Versius® Surgical Robotic System in order to ensure patient safety. Outcome measures being recorded include: operative time, length of stay, return to hospital within 30 days, and return to operating room within 24 hours.

In addition to the first global commercial deal taking place in India, the Versius® Surgical Robotic System is expected to be introduced in hospitals across Europe later in 2019.

Galaxy Care Hospital located in Pune, India is a specialist centre in laparoscopic and Robotic cancer surgeries. It has the first and only robotic theatre in western and southern India. The hospital is led by Medical Director Dr. Shailesh Puntambekar who has performed a number of internationally acclaimed procedures including India’s first successful womb transplant as well as pioneering laparoscopic radical hysterectomy for early stage cervical cancer, known globally as the Pune technique. Galaxy Care is now associated with the Care Group of Hospitals, with a number of hospitals across India.

About the Clinical Registry

The clinical registry established by CMR Surgical, working in partnership with customers will support post-market surveillance for the Versius® Surgical Robotic System. The clinical registry will be collecting the following clinical data on procedures conducted using Versius®: patient demographics, surgical history, date of diagnosis, planned procedure, operative time, estimated blood loss, return to operating theatre within 24 hours, length of stay, return to hospital within 30 days, mortality at 90 days, any complications that may have occurred. All data is anonymised.

About the Versius® Surgical Robotic System

Versius® resets expectations of robotic surgery by providing a versatile system that is portable, transportable and affordable. This is made possible because of its elegant form factor, modular design and individually cart-mounted arms. Versius® can move between operating rooms and even hospitals/clinics and gives the surgical team excellent access to the patient at all times.

Biomimicking the human arm, Versius® allows surgeons the freedom of port placement, but with the benefits of small fully-wristed instruments. With 3D HD vision, easy-to adopt instrument control and a choice of ergonomic working positions, the new open surgeon console has the potential to reduce stress and fatigue and extend the careers of surgeons.