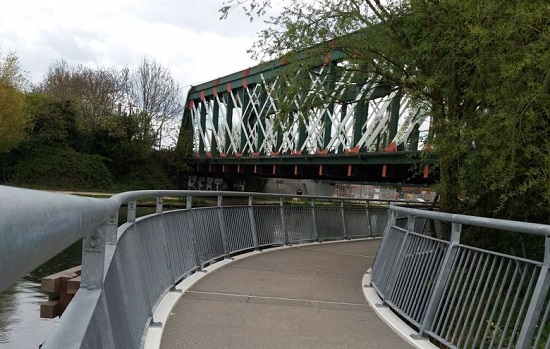 A jetty that will make it easier and quicker for people to ride or walk across Cambridge has opened today (Friday) as part of the flagship Chisholm Trail.

The jetty, which connects the footpath between Stourbridge Common and Ditton Meadows, is now available to use to allow people to walk and cycle across the common.

It follows the creation of the transformational new underpass at Newmarket Road, which was delivered from start to finish in just seven days.

Contractors began work on 26 March and had excavated the site in just 24 hours before laying the foundations of the 25m long underpass. A 500 tonne crane lifted 28 concrete units into place to form the underpass, before the area was refilled with 3000 tonnes of soil and material.

The Newmarket Road carriageway was reinstated and reopened on 2 April. A video of the work has been released today:

The underpass will provide quicker and safer journeys for pedestrians and cyclists, as well as improving traffic flows on Newmarket Road, as people will no longer need to use the signalled pedestrian crossing on Newmarket Road to cross when using the trail.

This forms part of the Abbey Chesterton Bridge and Chisholm Trail – a joint project between the Greater Cambridge Partnership and Cambridgeshire County Council.

The underpass and phase one of the trail will open later this year. Once complete, the trail will create a mostly off-road and traffic-free route between Cambridge Station and Cambridge North station.

The Greater Cambridge Partnership is the local delivery body for a City Deal with central Government, bringing powers and investment, worth up to £1 billion over 15 years, to vital improvements in infrastructure, supporting and accelerating the creation of 44,000 new jobs, 33,500 new homes and 420 additional apprenticeships.