Magna has won new seating business in North America with a global automaker and will supply seat structures from a new manufacturing facility in Lancaster, Ohio . 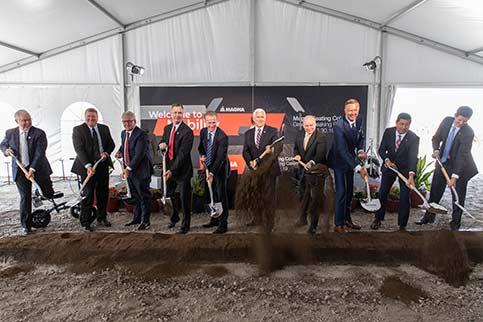 The company held a groundbreaking ceremony at the site where construction has recently started on the 150,000-square-foot facility with an initial investment of approximately $60 million. The event was attended by Magna CEO Don Walker, U.S. Representative Steve Stivers, and U.S. Vice President Mike Pence. In recognizing the positive impact of the jobs and investment created by the new facility, each also spoke in support of the proposed United States-Mexico-Canada Agreement (USMCA) trade deal.

“As our customers expand their manufacturing footprints around the world, we will be there to support them with world-class design, engineering and manufacturing,” said Walker. “With this investment and job creation we are extremely pleased to contribute to the strong automotive industry in Ohio and the United States.”

Magna’s new seating plant is expected to be operational in the first quarter of 2020 and employ 300 people by 2021, with the possibility for future growth. The facility represents Magna’s first dedicated seat structure plant in the U.S. and will feature robotic laser and MIG welding capabilities. The facility is strategically located to provide innovative seat structures to Magna’s customers, starting with a new plug-in hybrid vehicle for a global automaker.

The company currently has four manufacturing operations and employs approximately 2,700 people in Ohio. The new seating facility in Lancaster will be Magna’s fifth location in the state.

Magna is a leading global automotive supplier with 348 manufacturing operations and 91 product development, engineering and sales centres in 28 countries. We have over 172,000 employees focused on delivering superior value to our customers through innovative processes and World Class Manufacturing. ...