RealVNC in the running for UK's premier engineering prize

RealVNC's future-proofed software - which allows computer screens to be controlled remotely - is one of three innovations that have been shortlisted as finalists for the prestigious 2013 Royal Academy of Engineering MacRobert Award. 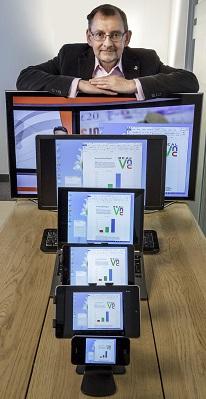 Although the shortlisted innovations are very different from one another, the three share a similar DNA: they were developed in the UK to create future-facing products that have opened up new markets and achieved international sales success.

The winner will be announced on 17 July at the Academy's Awards Dinner and receive a gold medal plus a £50,000 cash prize. Previous recipients include Microsoft Research's Xbox Kinect human motion-capture system, Arup's 'Water Cube,' the dramatic centrepiece of the 2008 Beijing Olympics and last year's winner, Jaguar Land Rover's Evoque SUV.

The 2013 finalists were selected from a long list of nominations, drawn from across contemporary engineering. They were chosen by a panel of Academy Fellows who have expertise across the range of engineering disciplines as well as personal entrepreneurial experience.

John Robinson FREng, Chair of the MacRobert Award judging panel, says, "These three innovative and successful companies demonstrate that engineering is thriving in the UK in very different sectors, from ground-breaking start-ups to established world-leaders. We have an incredible research base that leads to successful pioneering companies and we are delighted to have shortlisted for the MacRobert Award this year three great examples of the kind of companies that the Academy is championing through its Engineering for Growth campaign."

RealVNC's software allows a computer screen to be remotely accessed and controlled and is available on almost every type of computer, smartphone, tablet and device.

VNC protocols are an official part of the Internet, alongside those for email and the Web and there are over a billion copies of the software worldwide. Initially released as open source in 1998 and then re-written and commercialised, the software was the first to connect smart phones and tablets to computers and is future-proofed so it will be able to be used with new devices with screens that have not yet been invented.

RealVNC's technology uses clever algorithms to only send data about parts of a screen that are changing, rather than all of it, which minimises the amount of data sent and ensures that sharp images are sent quickly. This streamlined software enables the technology to be embedded in a plethora of third-party products, the only company to offer this.

RealVNC works with some of the biggest names in the business. Many millions of Intel chips now include a direct remote access capability powered by VNC, which means that computers can be controlled remotely even if they are faulty and unresponsive or hibernating. Most distributions of Linux contains VNC technology, Apple incorporates the software in its Remote Desktop Tool and the technology is in Google's Chrome browser enabling users to access applications on their remote computers.

The automotive industry is also using VNC software to let drivers and passengers access smartphone content such as navigation apps, music and video from screens built into cars. In healthcare, VNC is embedded in MRI scanners and X-ray machines, allowing remote troubleshooting, calibration and even diagnosis. The technology has even been used to control cameras remotely for use in polar bear tracking.

The core VNC software is on desktops, laptops, smartphones and tablets of every conceivable kind, and over 90% of revenue comes from abroad. These are impressive achievements for a company that has no external investors and has grown organically and sustainably.

Concrete Canvas' product of the same name is a fabric impregnated with a high strength concrete powder that sets rapidly to create a durable concrete surface when sprayed or immersed in water. It achieves 80% of its strength within 24 hours of applying water and is impossible to oversaturate, so it can be used in heavy rain or even underwater.

The product has been used in major construction projects in extreme environments, such as diverting glacier melt water around a copper mine in the Atacama Desert, Chile, wrapping a pipeline at the bottom of the Red Sea and protecting a slope to prevent dangerous erosion next to a busy railway line in Spain. With a lifespan of over 50 years and a low wear rate, it also has a safer failure mode than conventional concrete and allows many construction projects to be completed 10 times faster, more cost-effectively and with a lower environmental impact than traditional methods.

Concrete Canvas is up to 90% less wasteful to install than poured or sprayed concrete. It also reduces the amount of CO2 emitted in production, setting and transport and is available in portable rolls, allowing it to be used in difficult-to-access areas, such as deep mines.

Concrete Canvas was founded in 2005 and initially focused on creating concrete canvas shelters, inflatable structures that are covered with Concrete Canvas enabling two people to construct a concrete building in just two hours. While these shelters are still part of the business, the company has evolved and Concrete Canvas is now used in 40 countries worldwide, primarily in civil infrastructure and mining. Sales began in 2008 and have doubled year on year, tripling last year.

The Oxford Instruments X-Max large area detector is used for Energy Dispersive Spectrometry (EDS), a technique used to chemically analyse samples no thicker than a human hair inside a Scanning Electron Microscope (SEM). Examples include the analysis of semiconductor contaminants, gunshot residues and even nanomaterials.

X-Max detectors can be found in over 1,000 universities and research institutions. They have been used by a team at the Natural History Museum to analyse samples from meteorites, collecting chemical maps for different samples to lend to researchers, accelerating and internationalising research. Scientists have even analysed samples collected from volcanic vents on the ocean floor to explore the origins of life. The detector also has many commercial applications. It is used by mining companies to analyse ore samples for trace elements and consequently to calculate their economic potential, as well as by forensic scientists to identify gunshot residues and trace them back to weapons. It is also used to find defects in products before manufacturing in the semiconductor, solar panel and hard disk industries.

Before X-Max, EDS detectors required liquid nitrogen cooling. While early versions of Silicon Drift Detector (SDD) technology eliminated the need for dangerous and expensive cooling, typically their performance was not that high. The X-Max detector introduced several key innovations that transformed the performance. These included a thin vacuum seal window that is more transparent to X-rays, a more efficient electron trap and a large area sensor eight times bigger than before that can capture more X-rays. The result was a tremendous increase in speed, enabling measurements to take minutes instead of hours without the loss of image quality or spatial resolution. When used alongside a SEM, the detector counts and measures X-rays coming off a sample of material and with the help of Oxford Instruments' AZtec software, creates a colourful map to identify different elements and chemical phases.

The X-Max is compatible with most SEMs and is now established as the leading detector for rapid high resolution analysis. Since its launch in 2009, over 3000 units have been installed, of which around 95% have been exported.

RealVNC was founded in 2002 by the original developers of VNC to promote, enhance and commercialize VNC. ...