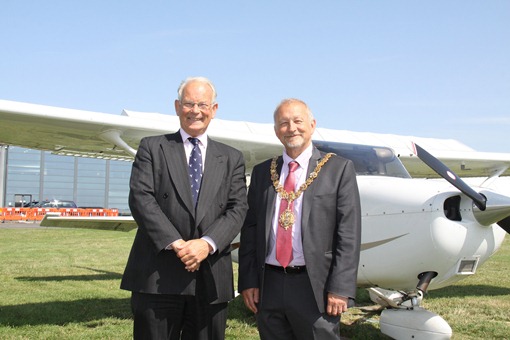 Councillor Paul Saunders, the Mayor of the City of Cambridge, visited Marshall of Cambridge on Wednesday 21 August for briefings about the important part the Company plays in the community, particularly in the areas of training, skills, employment and the economy.

The Mayor was welcomed to the Company and briefed by Sir Michael Marshall, the Chairman of Marshall of Cambridge, before being taken on a tour of the Company’s extensive engineering workshops by Group Support Executive Terry Holloway.  Following the works tour, the Mayor was taken for a flight over Cambridge by Terry Holloway in one of the Marshall owned Cambridge Aero Club Cessna 172 training aircraft.  The Cambridge Aero Club, which was founded in 1929, is one of the oldest flying training organisations in the world!

The Mayor of Cambridge said:  "I thoroughly enjoyed my visit and the opportunity to learn more about the Marshall Group businesses. The flight over the City was superb, we were blessed with blue skies and, from 2000 feet up, it was great to see all the landmarks and green spaces that make Cambridge so special.  I am indebted to Sir Michael for inviting me."

Sir Michael Marshall said: “It is always an enormous pleasure to welcome the Mayor of Cambridge to Marshall each year and to show the Mayor details of our many businesses.  We are very proud to have enjoyed exceptionally strong links with the City since our foundation in the automobile business in 1909.”