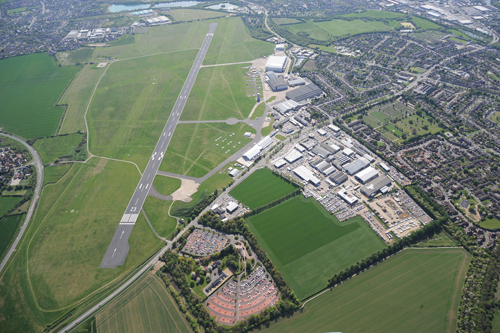 The new structure centres on the introduction of tiered aircraft bands.  Aircraft are priced in weight-related groups for ease of interpretation by aircraft operators, charter brokers and planners, rather than each type being allocated a designated fee charge.  For all business aircraft over 20 tonnes, price bands will be introduced at 10 tonne levels - up to 70 tonnes, then over 100 tonnes at a fixed fee.  For long haul business jets Cambridge Airport is also introducing zero-rated landing fees for all aircraft uplifting 5,000 litres of fuel.

“We are hugely proud of the terrific facilities we have established at Cambridge.  24/7 capability, a 1,965m runway with full ATC and airport services (fire and ATC to CAT 7 level), enabling us to regularly accept B757/Airbus A319/A320 sized aircraft.  This is supported by outstanding FBO facilities run by ExecuJet Europe, a long established and award-winning brand, good infrastructure and carefully selected complementary ground partners,” said Jon Harper, Business Development Manager for business aviation at the airport.  “The former pricing policy did not support our long-term strategy, which is to attract a wider base of business aviation clients, continue development of a vibrant aviation hub for the east of England region and be more competitive against the London centric airports,” he added.

Cambridge Airport is one of five regional airports in the UK capable of accepting business and passenger services with a 24/7 slot allocation during the Olympics, which opens in less than two weeks’ time.

“Cambridge Airport has the capability to handle the largest of privately operated jets, even up to B747 size if configured with fewer seats in VIP layout.  We are keen to encourage larger, wide cabin aircraft to come here and this bold new strategy will help make us more competitive with the likes of Luton, Stansted and Gatwick.

“We want business jet owners and operators to consider Cambridge when determining their travel itineraries.  Putting our prices in line with these bigger and frequently congested airports was an important part of our strategy for growth.  It is our response to what our customers have been telling us,” adds Harper – a value for money offering with transparent landing fee pricing and a more user friendly approach.  “Together with our FBO partner ExecuJet  we are confident that once customers experience what Cambridge has to offer they will be keen to return.”

In addition, Cambridge Airport is actively marketing its aircraft parking and hangarage opportunities.  ExecuJet is already supporting a foreign registered MD-87 in VIP layout at its Cambridge base and is in active discussion for more managed aircraft to add to the family within the next few months.  ExecuJet is managing 50 staff at Cambridge Airport, its new UK home since January this year.

As well as serving London, Cambridge Airport is also well positioned to make a significant contribution to the eastern region’s expanding economy. Cambridge is now in top spot in the UK for research and development. Cambridge is the ninth most visited city in the UK by international travellers and the UK’s tenth most important city in terms of business trip volumes, according to latest official visitor statistics.  The city recorded a 31% increase in business trip spend during 2011, up by £9 million to a total £38 million, according to Visit England

Cambridge Airport primarily targets the east of England market with a strong focus on Cambridge and its business, academic and industrial communities. It is also a strong provider to the equine community as it is just 10 miles from Newmarket and offers regular services for the transportation of horses.

Other aviation companies include Capital Air Services and 2Excel Aviation with a Eurocopter 155 and Beech Super King Air respectively, with both aircraft being available for charter. It is also home of the East Anglian Air Ambulance service, operated by Bond Helicopters.  A fully authorised Cessna Service Centre run by Marshall Business Aviation is located at the airport.