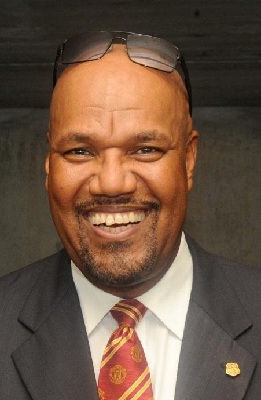 Former West Indies fast bowler, Colin 'Crofty' Croft, is coming to Cambridge! Known as one of the 'Four Horsemen of the Apocalypse,' Crofty put fear into the hearts of the world’s finest batsmen in the 70s and 80s.

These days Crofty is not quite so fierce. He spends his time between the USA, Carribean and UK, working as a freelance sports journalist and commentator on the international cricket series circuit.

And as well as being a sports personality and coach, he also trained as a teacher and then as a commercial pilot in the early 90s, so particularly delighted to be the guest of honour at Marshall Group’s charity match this year.

Team-mates once said of him that “Crofty would bowl a bouncer to his grandmother if she had a bat in her hand and he thought there was a wicket in it!”

This will be the second match organised by the Marshall Network in support of a local Cambridgeshire charity. This year, the teams competing are Ernst & Young, Bidwells and Marshall Group Sports and Social Club. The tournament will take the form of a “ten10”, (like twenty20 but shorter), with each team playing a minimum of two games each. The first game will start at 9:00am, with breaks for lunch and tea, followed by the Grand Final towards the end of the afternoon.

Crofty has offered to bowl an over to each of the three teams, and will also be helping with some coaching, signing autographs and handing out prizes.

In addition to the matches, there will be coaches from the Cambridge Cricket Board Coaches Association, organising some activities for children from 10:00am – 11:30am.

The Marshall Group of Companies was founded in 1909. Currently the 47th largest private (family-owned) companies in Britain, the Group comprises three main businesses: Aerospace, Land Systems and Motor Group, all of which have their head offices and majority of workforces based in Cambridge.

Employing over 4,000 people across the UK and further afield, the group has strong links with many community projects and local charities.

The Marshall Network, who are the prime organisers of the event, are a group of young professionals within the Marshall Group, who get involved with a number of charities as well as working on networking and development projects from within the organisation.

In 2011 they chose Blue Smile as one of the charities to support throughout the year, one of which was the first charity cricket tournament.

“We are delighted to be running a second cricket tournament in support of Blue Smile, following the success of last year’s inaugural match”, says Greg Nunn, Chairman of the Marshall Network, “and particularly happy that we will be joined by Crofty on the day.”

Blue Smile is a new charity dedicated to enhancing the emotional wellbeing and mental health of children and young people in Cambridgeshire schools through counselling, mentoring and therapeutic use of the arts. They use a similar arts-based approach to Kids Company in London, who has provided invaluable expert guidance and advice in developing the Blue Smile project in Cambridge.

“Blue Smile is delighted that, for a second year, Marshall cricketers and their friendly rivals are stepping up to the crease in aid of local children who are supported by the charity”, says Annabel Brunner, Chairman of Blue Smile. “We wish them a hugely enjoyable and successful day.”

Further information about the charity can be found in the press pack, and online at www.bluesmileproject.org

Churchill is one of Cambridge University’s younger colleges, founded in 1960. It is also the National and Commonwealth Memorial to Sir Winston Churchill and home to the world famous Churchill Archives Centre (which also looks after one of Margaret Thatcher’s handbags).

Set in 42 acres of tranquil open parkland on the edge of the city, the College offers extensive conference facilities, plenty of free parking and easy access to the M11.

Churchill College have generously offered the use of their cricket pitch, pavilion and changing rooms. Head Groundsman, John Moore, Deputy Groundsman Graham Pledger, and their team will ensure that the pitch will be in tip-top condition for the match.

Churchill College have also provided use of the Cockcroft Suite for the press conference.

“Churchill College supports a number of locally based charities and local schools over the year”, says college Bursar, Jennifer Brook, “and it is our great pleasure, in association with Marshalls Network, to be able to help Blue Smile with this fund-raising event”.