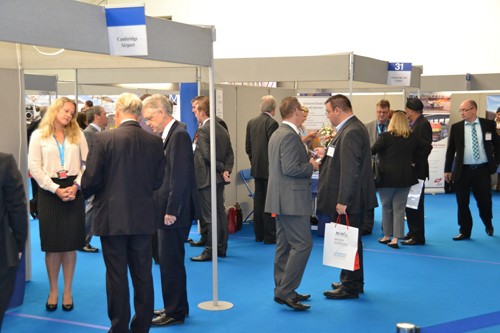 The organisers of the UK Business and Aviation Day 2012 (BGAD12), held last Tuesday (18 September 2012) at Cambridge Airport, are celebrating their most successful event to date. This year’s BGAD attracted over 450 attendees, which represents a 10% increase year on year.

Cambridge Airport has also confirmed the date for next year’s BGAD event, which will take place at the airport in the larger and popular location of hangar 22 on Tuesday 17 September 2013. BGAD 13 will see the reintroduction of an industry focused seminar programme.

Archie Garden, director of Cambridge Airport, commented, “This year’s unprecedented increase in footfall is a great endorsement of the enduring appeal of BGAD and the continued growth of the business aviation and motoring sectors.  Despite the difficult economic climate, the business aviation industry continues to defy the trend [in Cambridge and the wider area] by going from strength to strength. We look forward to welcoming delegates back to the airport again next year for an equally successful day of business and networking.”

Cambridge Airport is part of the Marshall Group of Companies, a private family business, owned and managed by the Marshall family. The business was founded in Cambridge in 1909, and entered aviation in 1929. Marshall Group activities which take place at the airport include Marshall Aerospace (engineering and technology), Marshall Executive Aviation (Jet Charter and management) and Cambridge Aeroclub (GA Training and Maintenance). Cambridge Airport primarily targets the east of England market with a strong focus on Cambridge and its business, academic and industrial sectors. It is also a strong provider to the equine community as it is just 10 miles from Newmarket and offers regular services for the transportation of horses. The airport is ideally positioned for easy access to London with just under an hour’s drive to Canary Wharf and East of London the location of the key Olympics venues. With a 1965m/6447ft runway accepting aircraft up to Boeing 757 or Airbus 320 and all regional jet types, it is suitable for short to medium haul passenger airline services.  It boasts CAA Category 7 Fire & Air Traffic Control status and has full navigational aids and communications, which include radar approach coverage up to 30nm and a new GPS approach to complement its ILS system. Cambridge Airport is home to a variety of aviation service providers including charter operator Marshall Executive Aviation, MEA which operates a Cessna Citation Bravo and Citation XLS as well as a Bombardier Challenger 300.
Twitter: @CBGairport