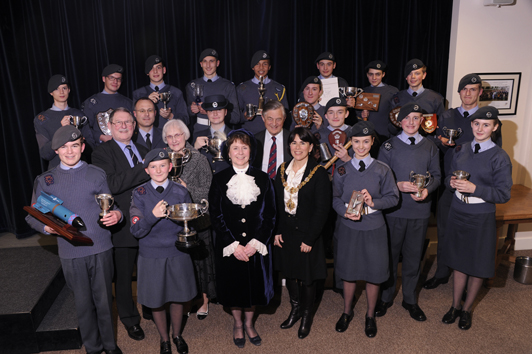 A glittering array of prizes was scooped by young Cambridge boys and girls, all members of the 104 (City of Cambridge) Squadron Air Training Corps at their recent Trophy Presentation Evening, where the prizes were presented by Mrs Penelope Walkinshaw, the High Sheriff for Cambridgeshire.

The ceremony was held in the Marshall of Cambridge Conference Rooms and hosted by the Company, and Sir Michael Marshall, the Chairman of the Civilian Committee said:

‘I am always very proud to see our cadets out and about in the local community, whether it is helping with car parking at Air Displays at Duxford, helping at charity and official events, collecting of the Royal Air Force Association Wings Day, or serving at Remembrance Day services.

I am also delighted that this year Sergeant George Metcalfe has been chosen as the personal cadet of the High Sherriff and that Cadet Warrant Officer Jess Bradshaw is serving as Personal Cadet of the Lord Lieutenant of Cambridgeshire.  These are two remarkable achievements which I do not believe can be matched by any other squadron in the country.’

Photograph: The prize winners, together with Sir Michael Marshall, Chairman of the Civilian Committee, Mrs Penelope Walkinshaw and Councillor Sheila Stuart, Mayor of the City of Cambridge.﻿

No 104 (City of Cambridge) Squadron Air Training Corps was founded in 1939 as an initiative of the then Mayor of the City of Cambridge, Alderman A A Spalding, assisted by Alderman Saville Peck, an ex-Mayor.  The first Chairman of the Civilian Committee was Sir Arthur Marshall, who retired from the Squadron Committee in 1975, when he was succeeded by his son Sir Michael Marshall.  No other squadron can lay claim to just two Civilian Chairmen during a 73-year period!  It is even more remarkable that these two Chairmen were father and son!!

The Squadron was afforded the rare distinction honour of being given the Freedom of the City of Cambridge in May 1999 on 60th Anniversary of its foundation.

The Squadron meet on Monday and Thursday evenings at their headquarters on Newmarket Road.  For more information about joining as either a cadet or member of staff please contact 01223 295324 (Monday and Thursday Evenings) or email info@104atc.org.  For the latest news and information from the Squadron you can follow them on Twitter @104AirCadets.

The Squadron encourages young people to bring out the best in themselves with a focus on teambuilding, leadership and management.  There are over 50,000 members of the Air Training Corps throughout the United Kingdom and the organisation provides the largest number of Duke of Edinburgh Award Schemes within the country.﻿﻿