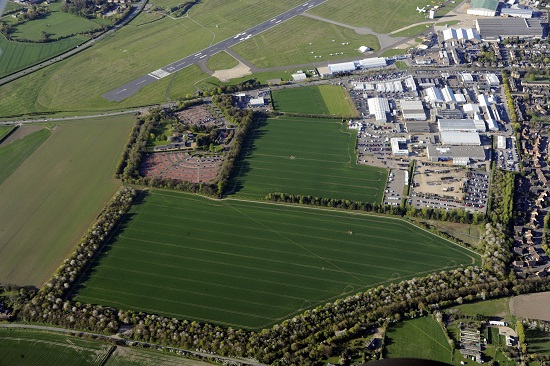 Plans for a new Cambridge urban quarter being developed on land north of Newmarket Road, next to Abbey Ward and Fen Ditton, comprising up to 1,300 new homes, a primary school, shops, businesses, open spaces and community facilities, are now well advanced. Marshall neighbours will get a preview of the developing plans over the next three days (4-6 July), when Marshall will be hosting a pre-planning application Public Engagement.

Marshall employees were given a private sneak preview yesterday (Wednesday) and the Company will be opening its doors to its neighbours and interested members of the public today Thursday 4 July between 6.00 and 8.00pm, Friday 5 July between midday and 8.00pm and on Saturday morning 6 July between 9.00am and 1.00pm.  The consultation will be held in the Conference Rooms at the Airport, accessed via Gate C on Newmarket Road.  The land, which is owned and is being developed by Marshall, has been named ‘Wing’ and will create a new vibrant mixed community, which will enhance Cambridge and, in particular communities to the east of the City, of which the airport is a long established part.

Robert Marshall, Chief Executive of Marshall of Cambridge (Holdings) Ltd said:  “We are very proud of our Cambridge heritage and, in particular, we value our exceptionally strong links with the local community, which includes many local businesses and the people of the Cambridge universities.  Throughout the last 100 years we have been passionate about the creation of employment, the development of skills through robust training programmes and the fostering of excellent relationships, and we want Wing to be the best example of a new development on the edge of Cambridge in terms of proximity to the City, the Science Park and the rural countryside beyond.  Wing is a very personal project for Marshall as it will be in, what could be considered as, our back garden.”

Marshall commenced its Wing initiative in January 2013, together with Pollard Thomas Edwards Architects and the Prince’s Foundation, with a three-day series of community planning workshops, which attracted over 1,100 visitors, including local authority members and officers, community leaders, Marshall employees and neighbouring residents.  Resulting from these workshops the draft framework plan has been developed, which will be on view during the public engagement between 4 and 6 July.  As part of its planning process Marshall has appointed Sanderson Sculpture Ltd as the lead artist on Wing, to provide a strong artistic input into the development.  Sanderson have been involved with a number of significant local initiatives, which includes the Corpus Christi Clock.  Marshall has also formed a designated health group to discuss the impact of the Wing development on health, both on the new and existing residents of Wing.

Emma Fletcher, Property Director, said:  “We have been tirelessly involving ourselves in the local communities close to Cambridge as well as with a Public Art Steering Group and the Health Group, which has involved conversations with the NHS and local healthcare providers.  Marshall is a corporate sponsor of the Cambridge Cycle Campaign and sponsored the Jubilee Cycle Path already running through the Wing site and we are very eager to improve cycle links as well as very good public transport links for all of those who are going to live and work on Wing.  This consultation event is a wonderful opportunity for local people to learn more about Wing, to ask questions and to give feedback to the team working on the project.”


Image: aerial photograph with views of the site.

The 180 acre site lies to the north of the Newmarket Road, opposite the Airport and includes the existing Park and Ride Site.  It is designated in the 2008 East Cambridgeshire Action Plan for major residential and mixed use development.  The Master Plan is expected to include between 1200 and 1300 homes, a primary school, local shops and extensive employment space focused on Marshall’s motor businesses and other engineering industries.  There will also be a wide variety of open spaces, including urban squares, parks, woodlands and sports fields.

Using its ‘Enquiry by Design’ process The Prince’s Foundation facilitated a three day series of community planning workshops earlier in January, which allowed key stakeholders to have their say in the process and to share valuable information which will contribute towards the final proposals.  These workshops attracted over 1100 people, including local authority members and officers, community leaders, Marshall Employees and neighbouring residents.  The feedback received during this process was consolidated into a background planning document, which is available for viewing on the website.

Pollard Thomas Edwards Architects (PTEa), which specialises in the creation of new neighbourhoods and revitalisation of old ones, has been selected by Marshall as the principal architect for the design of the development, which will be submitted to South Cambs District Council sometime in the autumn, following the  public consultation between 4 and 6 July.