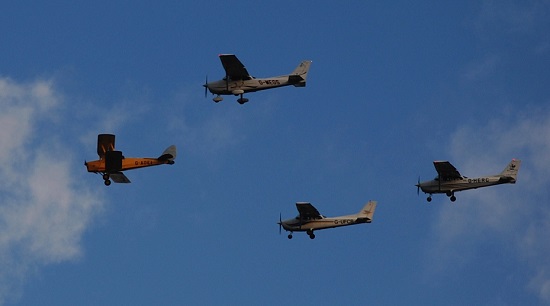 Cambridge Aero Club staged a unique aerial formation of aircraft last week as a special treat for members of the Marshall 30 Club – employees and former employees who have clocked up more than 30 years of service – when a Tiger Moth led a formation of three Cessna 172s belonging to the Cambridge Aero Club. It is believed that this is the first occasion this particular formation has been flown anywhere in the world.

The formation was mounted to celebrate the 75th anniversary of the arrival of the first Tiger Moth aircraft to Cambridge Airport in 1938 and since that day Tiger Moths have been used on a continuous basis from Cambridge Airport for flying instructional purposes.  No other airfield or flying organisation in the world can match this particular record.

Terry Holloway, Group Support Executive for the Marshall Group of Companies, said “In fact, our links with de Havilland go back even further than that because the late Sir Arthur Marshall learned to fly in a de Havilland Gipsy Moth in 1927 and since 1929 when we opened our first airfield, we have had de Havilland aircraft based and operating from Cambridge Airport!”

Howard Cook said “It was a unique and very pretty formation which we hope to repeat in 2014 at one or two air displays in East Anglia."

The Cambridge Aero Club is one of the oldest flying schools in the world, having been founded in June 1929 coincident with the opening of Marshall’s first airfield at Fen Ditton.  Today, the Aero Club offers a range of flying opportunities to its members, which includes basic instruction, advanced navigational instruction on Cessna 172 training aircraft and advanced aerobatic training in a highly manoeuvrable Extra 200 aerobatic aeroplane.