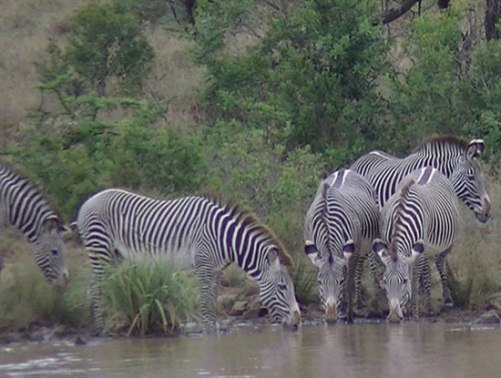 Lucas Joppa loves to watch animals, too, but his motivation includes an additional dimension. A scientist in the Computational Ecology and Environmental Sciences (CEES) group at Microsoft Research Cambridge, Joppa heads the Conservation Science Research Unit, which focuses on his key interests: science, policy, and tools and technology.

Last month, Joppa and his CEES colleagues took yet another step toward melding a couple of those interests by offering for download ZooTracer, a desktop tool that can be used to trace animal movement by using consumer video equipment. The product of collaboration between CEES and the Computer Vision group, also from Microsoft Research Cambridge, the ZooTracer download offers three distinct benefits:

“We hope people use it to track animals in video footage,” Joppa states. “Doing so is an important step in addressing fundamental ecological and environmental problems.

“For example, bee populations are in drastic decline. What plants do they pollinate—and why? That is a question pretty relevant to the production of food for human consumption, but actually watching bees fly around and trying to track their plant preferences and the flight paths they take is a pretty difficult task. ZooTracer allows scientists to collect these very easily.”

The ZooTracer software can provide accurate tracking of multiple, unmarked, interacting animals in arbitrary video footage. It also can cope with variations in lighting, camera movement, and object appearance—and it does so regardless of the type of recording device or habitat.

“Most other video-tracking software packages require the user to have thought quite hard about what they were going to do before they did it,” Joppa observes. “For example, using extreme background subtraction algorithms allows for a heavily automated object detection and tracking process. But the actual collection of video footage appropriate for such algorithms can become a trying affair—and it certainly doesn’t work for most field biologists!

“We have thrown that thinking by the wayside and said that if we allow the user to input a small amount of information about the system, then perhaps we can make a tool significantly more generic than currently exists. So, have some footage taken with your smartphone with shaky hands and a strangely lit background? No problem! ZooTracer should be able to handle it, and if it doesn’t, you are able to modify the algorithm’s parameters through the user interface to attempt to make it work for you.”

In short, ZooTracer represents a leap forward in enabling the collection and analysis of behavior, not just for laboratory experiments, but also for biologists in the field. It will prove helpful for any scientist interested in tracking objects in video.

“I’m really intrigued by the many other, non-ecological, uses I’m sure people will find for the software,” Joppa says. “Putting people back in the loop and allowing them to decide what they want to track should lead to some pretty interesting scientific applications.”

That, often enough, is the hallmark of successful research: Not only has it been abstracted to a level where it works for the problem at hand, but its design also is sufficiently flexible to inspire a class of entirely new challenges.

“Just because we happen to be interested in animal movement doesn’t mean you have to be,” Joppa enthuses. “We used animal movement as our motivation for completing the tool—and it turned out to be a fantastic collaboration between one of the world’s leading computer-vision teams here at Microsoft Research, led by Andrew Fitzgibbon, and our own computational-ecology group.”