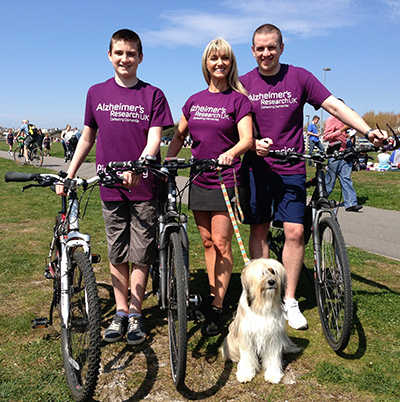 Former Brookside actress Paula Frances Muldoon, from Waterloo in Merseyside, has been made a Champion of Alzheimer’s Research UK in recognition of her exceptional support of the charity.

Over the past three years, Paula has raised thousands of pounds for the UK’s leading dementia research charity as a tribute to her late dad, Michael, who was diagnosed with frontotemporal dementia when he was just 55. He died in 2012, aged 64. Paula joins a small but growing group of 28 Champions – supporters who have gone above and beyond to help Alzheimer’s Research UK in its mission to defeat dementia.

Busy mum of two, Paula, 45, played Diana Corkhill in the hit soap Brookside for three years and is also known for her roles in Doctors, Nice Guy Eddie and Moving On. In between acting and fundraising for Alzheimer’s Research UK, she works as a personal fitness trainer and nutritionist.

Paula explained her motivation for supporting the charity:  “My wonderful dad was such a character and a real entrepreneur. He led the way by setting-up 10 gyms across the country before they became a national craze. I’m so pleased to continue his legacy by encouraging people to keep fit and using those skills to raise money for a charity very close to my heart, Alzheimer’s Research UK.

“Before Dad’s diagnosis I hadn’t realised there aren’t any treatments to stop dementia in its tracks. It’s really opened my eyes to the fact that there’s just not enough funding for research. It’s been amazing bringing people together with a shared experience of dementia to raise much needed money.

“In 2012 I organised a 30 mile sponsored cycle ride and the following year more than doubled it to a 70 mile ride. This summer I mixed it up a bit by organising a seven-hour exercise marathon instead. Friends, family and the local community have been really supportive and generous.

“Dad was so courageous as little by little frontotemporal dementia stole his pioneering spirit, precious memories and independence at such a young age. I got to learn a lot about his illness over the years and how the frontal lobes regulate things like personality, emotions, reasoning and decision-making. It helped me understand the changes in his behaviour.

“Although it’s too late for Dad, it’s encouraging to see the progress being made with research, giving hope to people living with dementia today and future generations. I’m proud to be doing something positive to help Alzheimer’s Research UK and very honoured to be made a Champion of the charity.”

Miranda Johnson, Head of Corporate and Community Partnerships at Alzheimer’s Research UK, said: “We are delighted to make Paula a Champion of Alzheimer’s Research UK – she is such a determined and energetic supporter of the charity and truly deserves this honour. In addition to raising thousands of pounds for our world-class research, she is always willing to share her story with the media in order to increase public understanding of frontotemporal dementia.

“There are over 830,000 people in the UK living with dementia today, including more than 18,000 people in Merseyside. Dementia poses one of the greatest threats to public health now and in the future but funding for research still lags far behind other serious diseases. We rely on public donations and it’s thanks to the commitment of people like Paula that we are able to continue our vital work.”